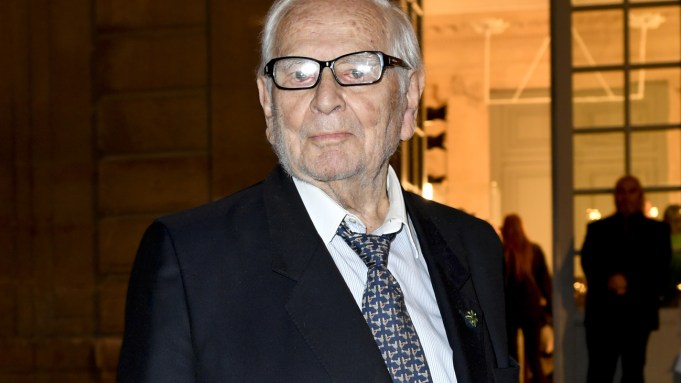 ART HOUSE: Guests including Fanny Ardant, Vincent Darré and Jeanne Damas flowed into the Picasso museum in Paris Monday night, passing through a courtyard strung with lightbulbs, a lemon tree in its center, and into the upper story of the site to take in the Jacquemus show.

Even Pierre Cardin turned out for the event, claiming it’s the only young designer show he’ll attend. “Out of the shows, I only go to Dior, who always [invites] me. I don’t tend to go to other shows as it’s very delicate; if I go to one then I have to go to all of them,” said Cardin, who lauded Simon Porte Jacquemus’ talent. When asked if he could see the designer being a potential contender to his throne, he replied: “No, he has his own personality, which is super important in this job.”

Surveying the crowd, Caroline de Maigret revealed it was one of her favorite museums. “I come here really often and what I adore about the new version of the museum since its renovation is the fact that you also have his private collection; it’s really interesting to see what he wanted to collect and who his friends were. The last time I went, I was with my son, who is 11, and my husband who is this rock ‘n’ roll guy, and the three of us each liked different pieces but came out and were all so overwhelmed by the beauty of this place,” she said. “Regarding Jacquemus, I’m so happy that he got this place. I did photos for him five years ago when he was just starting because I really believed in him, so we do have a story together.”

After the show, guests streamed into the courtyard for the “La Bomba” after party, which contrary to its name was a chill affair, with guests sipping summery cocktails including peach coolers, red berry coolers and French margaritas. Diana Widmaier Picasso, dressed in a pretty floral dress, raved about the collection’s southern flavor.

“It’s very much about the Mediterranean, it’s a joyful, colorful collection,” she said, adding of the unique location: “I know that Jacquemus has a lot of admiration for Picasso so for him to be received in his house is inspiring.”

She also revealed she is working on a Picasso show due to open on Oct. 18 at the Gagosian gallery in Paris. “It’s called ‘Picasso and Maya, Father and Daughter,’ it’s about my mother, Maya,” said Widmaier Picasso who herself has a five-month-old daughter. “I think for an artist to have a child is very inspiring because there’s nothing more amazing than a little human being who is discovering life. I think it’s fabulous to see how somebody as genius as Picasso is of course looking at his daughter and making extraordinary work but at the same time you feel he’s just a human being, a father, who is very tender,” she said of the exhibition. “There’s a series of drawings that are very beautiful because he’s just observing reality with great strength. He is able to render the beauty of a child, the little hairs, the expressions. It’s great to see a giant who is also very tender.”