Pink and Julie Delpy think global and shop local at a party hosted by LACMA and Farfetch to celebrate the latest Wear LACMA fashion collaboration. 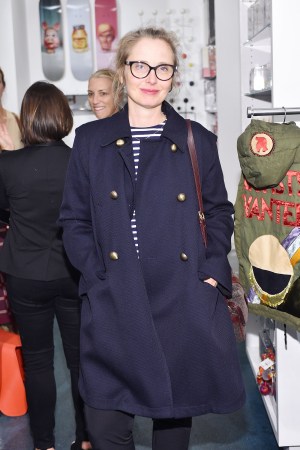 THINK GLOBAL, SHOP LOCAL: Barely recuperating from last weekend’s Halloween blowouts and gearing up for the Los Angeles County Museum of Art’s annual Art +Film gala with Gucci this Saturday, socialites, artists and celebrities squeezed some more revelry into their schedules on Wednesday night to celebrate the 50th anniversary edition of Wear LACMA. With a nip in the air, Eva Chow, Tatiana Sorokko, Jennifer Tilly, Tasya van Ree and other guests huddled in the museum’s gift shop, where they sipped bubbly, perused the stylish wares and occasionally broke Champagne glasses while doing both.

“I brought my Christmas list,” said Pink, hugging a pair of children’s art books. While music is her forte, she also experiments with other forms of art: dance “with my physical body” and culinary pursuits like winemaking, she said.

The pop star also likes to play with fashion, as evident in her pairing a royal blue topper with harem pants covered in a squiggly print. Among the accessories and clothing created for LACMA by 19 designers including Juan Carlos Obando, George Esquivel and the designing sisters from Rodarte and Newbark, she already identified some on her personal shopping list. “The Co shirts — those are beautiful,” she said. “And Nick Fouquet is my favorite hatmaker.”

Directed to seek inspiration from the museum’s vast collection for the project co-sponsored by Farfetch, Co’s Stephanie Danan and Justin Kern turned to Jacob Adriaensz Backer’s 1638 “Portrait of a Young Woman” as the model for their crisp black and white blouses accented with ruffles. Fouquet incorporated straw, jacquard, felt and even a blue-tipped match for his assortment of $1,350 hats that would have fit into the Bohemian School’s 18th-century painting of a fortune-teller. While the Bohemian School artwork is on display at the museum, some pieces weren’t currently on view. For instance, the public can enjoy Gloria Stuart’s “Watts Tower with Kites” only via the embroidered print on Dosa’s sheer dress retailing for $1,232.

Greg Lauren had ideas for the star of Josef Sigall’s work titled “The Wanderer” circa 1935, who inspired his contribution of six one-of-a-kind jackets selling for $2,995 and $1,500 bags repurposed from antique linen. “If that man was alive, he’d have been in my men’s runway show in July,” he said. Instead, the designer is focused on another man — his son, Sky, with his wife, actress Elizabeth Berkley — who’s visited the museum to gaze at the Alexander Calder exhibition and run around Chris Burden’s light sculpture.

Julie Delpy is also familiar with field trips to LACMA. When not worrying about the financing for her latest movie, which, depending on the source of the money, will film in either London or Los Angeles, “I come here all the time with my son,” she said.