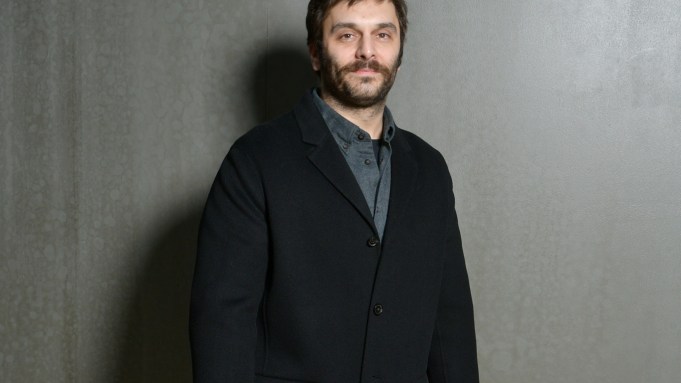 WORKING OUT: Pio Marmaï has had to hit the gym for his next role, in what he described at the Acne Studios show Wednesday afternoon as a “French superhero movie” directed by Douglas Attal. “There will be lots of fighting and things like that,” he said. “I’m working out a lot and trying to tone my muscles as much as possible, I’m eating nothing but broccoli.”

Chatting away to him, rising talent Félix Maritaud, who is nominated for best upcoming actor at the Prix Lumières next month, also has a new movie project up his sleeve, as well as working on several shorts.

Further down the front row, Yung Taco mingled with the likes of U.K.-based singer Bakar, who is working on his second album. “My last record was about the city, the next one’s a bit more personal,” he said of the project, which he hopes to release before the end of the year.

Sitting next to him, singer Eddy de Pretto is also working on his sophomore release after taking France by storm with his debut album last year. “It will be crazier and bigger than the first one,” he vowed.

De Pretto also has a French tour coming up, but has no plans for world domination just yet. “I’m focused on conquering France for the moment, we’ll see about the rest of the world.”