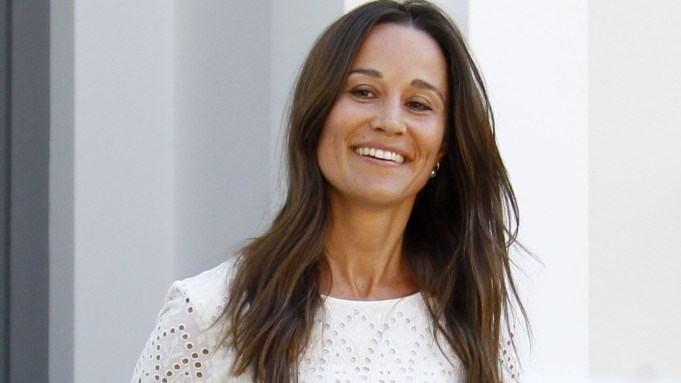 LONDON – Pippa Middleton, the world’s most famous bridesmaid, has just gotten engaged to her financier beau James Matthews, and the British press is expecting a wedding to rival that of her sister’s, the Duchess of Cambridge.

Richard Kay of the Daily Mail broke the news in his column on Tuesday, reporting that Matthews, a self-made hedge fund multimillionaire, proposed during a trip to England’s Lake District. “She said ‘Yes’ and suddenly Britain’s most eligible young woman was off the market,” wrote Kay, who is keeping up his close ties to the royals, having been a favorite journalist of Princess Diana during her stormy separation from the Prince of Wales.

Middleton and Matthews have been dating for less than a year — although they were an item for a short time back in 2012. Middleton has certainly witnessed some romantic ups and downs since the royal wedding in 2011. At the time, she was with her longtime boyfriend, the City of London broker Alex Loudon, but the pair eventually split, reportedly due to pressures from her new social status and social life. Her circle, which overlaps with that of her sister and the young royals, is known here as the “Glossy Posse.”

A spokesman from Kensington Palace noted that the duke and duchess were “absolutely delighted with the news.” Middleton and Matthews also released a statement stating they will be married next year on July 17.

She dated Jonathan “JJ” Jardine Paterson, an heir to a Hong Kong banking dynasty, and was repeatedly linked with her old Edinburgh University roommate George Percy, the future Duke of Northumberland whose family is one of the richest in the country, as well as Billy More Nisbett, a property developer.

Most recently, Pippa dated the financier Nico Jackson for three years before reuniting with Matthews.

Organizing the wedding festivities shouldn’t be an issue for the former party planner, whose parents made millions founding and running Party Pieces, a party-supply service. She also organized the after party for the newly wed Duke and Duchess of Cambridge at Buckingham Palace, reportedly installing a disco ball in its hallowed halls.

Like all siblings of sudden-royals — or ex-girlfriends/boyfriends of actual royals – Middleton has tried her best to capitalize on her new-found fame by following the well-trodden path of so many British upper-class women before her. She’s contributed to Tatler, Vanity Fair, The Spectator (in one column she ironically mused on Kim Kardashian’s bottom) and Waitrose Kitchen, where she’s written about topics such as croquet, salmon fishing, truffle hunting in Italy as well as on health and fitness topics. The perma-tanned, sporty Pippa also worked for the London party planners Table Talk, and has in the past edited The Party Times, the e-magazine for her parents’ business Party Pieces. She’s even written a book, “Celebrate: A Year of Festivities for Families and Friends.”

But the book flopped spectacularly, with critics poking fun at Middleton’s blatantly obvious tips — use a long-handled fork to roast marshmallows — and twee observations. “The nurturing of friendship, family and home feels more important than ever to me in a world that sometimes appears to be moving so fast that we forget what really matters,” she said in the introduction to the book.

Middleton also tried to carve her own way in America, last year auditioning for a chance to be a roving correspondent on the NBC “Today” show. But the British press slammed her “cringe worthy” performance, and the idea was dropped.

The problem is that Pippa remains most known for one thing: as the then 27-year-old maid of honor for her sister. She was in the public spotlight for her figure-hugging Alexander McQueen dress as she carried the wedding train for the duchess into Westminster Abbey. It’s her posterior that will be remembered for posterity.

Then again, things could change and soon it might be the duchess’ turn to take up wedding duties for her younger sibling.

Matthews is a 40-year-old hedge fund manager and the owner of Eden Rock Capital Management. His parents, David and Jane, who are also self-made multimillionaires, own the Eden Rock Hotel in St Barths.

Matthews’ brother is the British TV star Spencer Matthews of “Made in Chelsea.” Spencer is clearly the family’s black sheep. While the elder Matthews was out hedging his bets and generating profits, the younger one is known as a party animal and womanizer.

That said, the palace is used to managing naughty Prince Harry, so the arrival of Spencer in the wider family shouldn’t come as too much of a shock. And Buckingham Palace already has become accustomed to the Duchess of Cambridge’s siblings: At the time of the wedding, Pippa and her brother James Middleton had become as huge in the media in London as the flashiest of England’s footballers and their wives, “X Factor” stars and TV celebrities.

But being an extended member of Britain’s royal family has created restrictions for Pippa, limiting who she associates with and the sort of businesses she can pursue. Marriage might just be the solution to her search for her own path outside the shadow of her globally famous elder sister. She can settle into domestic bliss with her rich husband, shuttling between what no doubt will be houses in London and somewhere in the English countryside (to indulge in shooting, riding and other sports) and then winters (with or without her royal sister) on the ski slopes of France or Switzerland and, no doubt, on the beaches of St Barths.

And she can continue with her charitable work — since 2014 Middleton has been an ambassador for the British Heart Association and earlier this year she auctioned a limited-edition printed scarf and dress, designed in collaboration with Tabitha Webb, in support of the British Heart Foundation. She is also an ambassador for Disability Snowsport U.K. and The Mary Hare school for deaf children.

The British press will no doubt be breathless over the coming months speculating over the wedding details and what might follow. And, the tabloids being the tabloids, they no doubt will be hoping for some scandal along the way.