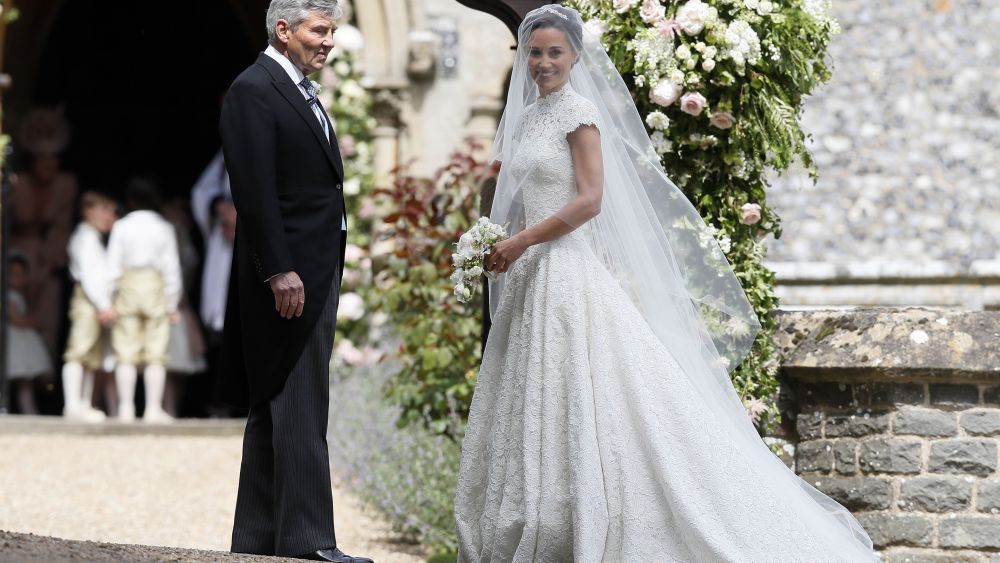 LONDON — The paparazzi photos last year gave the game away: Pippa Middleton chose Giles Deacon to design her wedding gown, which was finally revealed on Saturday morning at her wedding to hedge fund manager James Matthews in Englefield, Berkshire, England.

The dress was a bespoke classic lace gown with a high-neck, cap sleeves and an open back. Her veil was designed by Stephen Jones, created with tulle and a dégradé of embroidered pearls. Her Maidenhair Fern tiara and hairpiece were handmade by Robinson Pelham. She wore ivory satin Manolo Blahnik pumps with pearl embellishments.

The sister of the bride, the Duchess of Cambridge, wore a pink Alexander McQueen dress, while three-year-old Prince George was the page boy and wore a white shirt with knee-skimming trousers. The bridesmaid, two-year-old Princess Charlotte, was in a white dress and wore a white floral crown. The youngest royals’ clothing was designed by Pepa & Co.

“The dress is constructed with a cap sleeve, high neckline and features a corseted bodice with draping to the front and a heart-shaped detail at the back,” Deacon said. “The bespoke silk cotton lace was hand-appliquéd to create an illusion of the dress having ‘no seams.’ The lace bodice is embroidered with pearl detailing over an organza and tulle underskirt, which has layer upon layer to enable a floor-sweeping movement. It’s a privilege to show the craftsmanship that my team produces in London and a real testament to Pippa’s support of British fashion.”

The ceremony took place at St. Mark’s Church and was being followed by a reception at the Middleton family home in Bucklebury, Berkshire, six miles from the 12th-century church.

A fleet of BMW, Mercedes-Benz and Range Rover vehicles ferried the guests to the church. Men were in morning suits and top hats — while some wore kilts — while women donned dresses and wore hats and fascinators.

Security was tight, but that didn’t hold back a group of reporters, press and village locals, who arrived ahead of the ceremony and stationed themselves outside St. Mark’s, to catch a glimpse of the wedding circus.

According to the British newspapers, villagers were told not to talk to press about the wedding. Newspapers also reported that Middleton has banned her wedding guests from posting pictures on their social media accounts.

The reception will have a Scottish theme. (Pippa is a graduate of the University of Edinburgh.) There is also set to be a Spitfire flypast and an air show with vintage World War II planes, which the Daily Mail said was a bit much, given that the newlyweds are not royals.

Tabloid photos of Deacon, clutching an oversize garment bag, and members of his team outside Middleton’s multimillion dollar London home last November provided an early tip-off as to who was designing the dress. Photographers also got a picture of her mother leaving the apartment around the same time.

Middleton made her mark five years ago at her sister Kate’s wedding to Prince William. She nearly stole the show at Westminster Abbey, dressed in a white bridesmaid’s dress by Alexander McQueen.

Middleton and Matthews were engaged after dating for less than a year — although they had briefly been an item in 2012. Matthews proposed to Middleton during a trip to Lake District. He bought an octagonal ring with a three-carat Asscher-cut diamond from London jeweler Robinson Pelham for Middleton.

Made in Chelsea: Pippa Middleton Prepares to Marry James Matthews >>