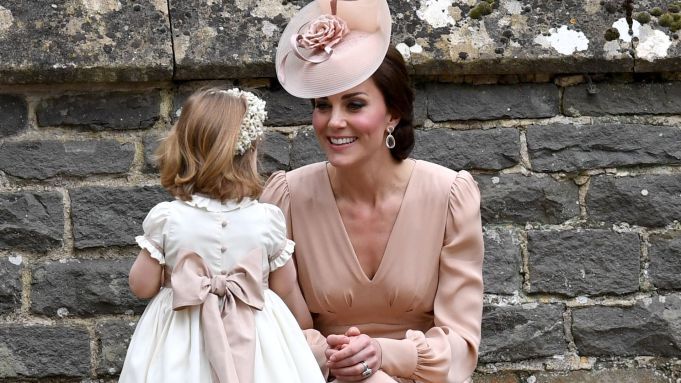 MCQUEEN’S REIGN: The Duchess of Cambridge did her best to remain as low-key as possible during her sister Pippa Middleton’s wedding on Saturday, and her choice of dress suited her attitude.

There was no way she would ever risk upstaging the bride, like Middleton nearly did in her curve-hugging Alexander McQueen gown at Westminster Abbey six years ago. Instead, the duchess wore a custom-made, Forties-style midi dress by McQueen, the same fashion house that created her wedding gown.

The dress had full sleeves, a peplum waist and full skirt, and its peachy pink color complemented the cascade of roses around the door of the church. Her hat, adorned with a large rose, was by milliner Jane Taylor, and her morganite earrings were from jeweler Kiki McDonough. The stiletto heels were Gianvito Rossi.

Mother-of-the-bride Carole Middleton also plumped for pink — and she chose the same couture brand as she had six years ago for her elder daughter’s wedding. Mama Middleton donned a Catherine Walker coat dress with buttons down the front and bracelet sleeves, pairing it with a wide-brimmed hat.

The ceremony was held at St. Mark’s Church in Englefield, Berkshire, and the reception is taking place under a glass marquee in the back garden of the Middleton family home in Bucklebury, Berkshire, six miles away.

Other guests included Princess Eugenie, Roger Federer and his wife Mirka and Princes William and Harry.

Made in Chelsea: Pippa Middleton Prepares to Marry James Matthews

Pippa Middleton Ready to Wed James Matthews on May 20