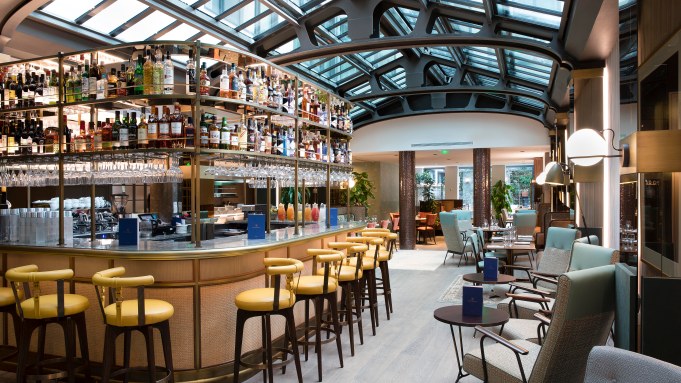 As retailers around the world hunt for fresh ways to lure shoppers into their stores, boutiques in Paris offers varied responses. Two new clothing stores answer a craving for intimacy, turning to the apartment-store model.

Gabriella Cortese fashioned her L’Atelier Antik Batik as part boudoir, part showroom. The space’s sparser side has tall ceilings with brass tubing stretching down from exposed beams. A small side entrance leads to the cozy part, where rich floral-print patterns on the walls match the fabric on its sprawling sofas on which tea is served. As for the clothing, India serves as inspiration.

Carolina Ritzler, who makes contemporary jumpsuits, has opened her first store in the form of an upscale Parisian apartment. Spread over 1,290 square feet, the designer’s pieces are presented in a backdrop of stark white walls and traditional parquet. A marbled fireplace sits behind a modern sofa and easy chairs.

Claiming a new place for baggage, Florentine leather maker Il Bisonte has opted for a colorful pop-up store on Rue Saint-Roch, near the Rue Saint-Honoré. The 860-square-foot space stretches over two floors with small leather goods dominating the ground level. Wallets and pouches are displayed on a brown wooden table, in blue square boxes and on yellow rounds, with a playful ceiling of iridescent pendants hanging above — the work of artist Felice Limosani. Visitors can listen to vinyl records chosen by brand founder Wanny Di Filippo.

American travel bag maker Tumi, meanwhile, is setting down roots on the Champs-Elysées. The sleek, two-story, nearly 1,200-square-foot store will offer personalized products as well as some limited-edition items in black leather, including the Sonia Satchel, at 795 euros, and Cecelia tote, at 495 euros, all in black leather. For men, the Nellis backpack costs 645 euros. — Mimosa Spencer

BEAUTY BOUTIQUE: Augustinus Bader on Feb. 28 will open the first boutique showcasing his new skin-care line, whose formulas are billed to kick-start the body’s natural healing process to reverse signs of aging, including minimizing frown lines, toning and providing support to moisturize and volumize skin.

The German professor adapted his medical treatment for burn victims into a skin-care brand, whose formulation contains a proprietary Trigger Factor Complex (or TFC8) that’s made of about 40 natural amino acids, peptides, high-grade vitamins and synthesized molecules naturally found in skin and created to stimulate intrinsic stem cell repair.

The 900-square-foot shop, located in Paris’ Palais-Royal will carry the eponymous brand’s two products – The Cream and The Rich Cream — each of which retails for 225 euros per 50-ml. flacon.

The store has plush seats and a fabric sculpture of a flower. The shop infused with natural light also boasts a piano (in a nod to Bader’s first calling) and films on display to explain the brand’s philosophy. — Jennifer Weil

ART’S CONTENT: Off the runways, textiles are on display this season in a Parisian museum — the Centre Pompidou, which is featuring works by American artist Sheila Hicks. Sixty years of fascinating creation, including her iconic soft sculptures in wool and linen, address notions of color and space.

Bettina Rheims is exploring women’s identities with 50 photos at the Château de Vincennes. The photographer shot portraits of incarcerated women in 2014 and is now — in a meta moment — exhibiting the works in what had been a prison in the 16th century.

Exciting creative encounters are happening at the Petit Palais with the display of Dutch and French painters. Spanning a century of artistic dialogues — from Théodore Géricault to Piet Mondrian, it includes Kees van Dongen’s work, as well. The latter’s oeuvres are also simultaneously on view in the Musée de Montmartre in an exhibit demonstrating how van Dongen’s stay at the famous atelier La Bateau-Lavoir marked a turning point in his career.

Meanwhile, Raoul Hausmann is unveiling a lesser-known part of his oeuvre at the Jeu de Paume museum: photographs. The German artist, who was a key figure of the Dada Berlin movement, reveals a peaceful energy not only in portraits but also in treating architectural subjects.

Last but not least there’s Cédric Dordevic, a former photographer at Fairchild Publications, who is presenting eight years of work for W and WWD in a show of 35 images at the Galerie Gutknecht. This offers a comprehensive sampling of the Nineties fashion world. — Anne-Aymone Gheerbrant

“Van Dongen and the Bateau-Lavoir,” through Aug. 26

“Raoul Hausmann. Vision in Action,” through May 20

HOME AWAY FROM HOME: A new five-star boutique-hotel has popped up in the Marais — Maison Bréguet, a former washing-machine factory that’s been morphed into a living space with a homey feel.

The brainchild of Brice Errera and Samuel Gelrubin, its 53 rooms come in a variety of sizes and formats, including suites, adjoining rooms, rooms with terraces and a freestanding house including three bedrooms and a garden.

David Lanher and Marco Marzilli (also behind Anima) dreamed up the restaurant here, presided over by chef Julian Maiuri. For the culinary dishes served at a bar in front of the kitchen, on benches or in a private dining room, he uses ingredients culled from local markets and small producers.

Accessible for hotel guests only are a swimming pool, sauna, hammam and fitness room.

Prices range from 250 euros for a deluxe room to 600 euros for a junior suite, although until early April there’s a 30 percent reduction. Depending on the season, the standalone house, which sleeps up to eight people, runs from 800 euros to 2,000 euros per night. — Jennifer Weil