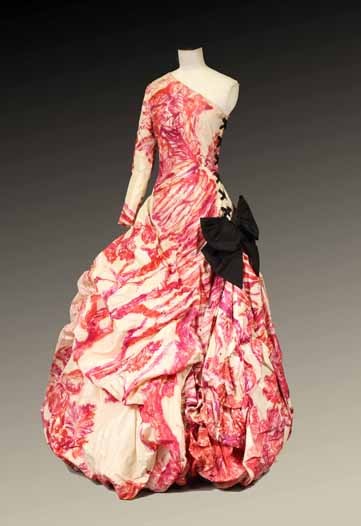 GOING, GOING, GONE: A weekend sale by Paris auction house Drouot of the final Jean Patou collection designed by Christian Lacroix, for the house’s spring 1987 collection, raised 168,462 euros, or around $226,000 at current exchange, exceeding estimates. The highest bid came for a taffeta evening gown in a toile de Jouy-inspired print, which fetched 10,228 euros, or $13,719, while a “slave bracelet” sold for 800 euros, or $1,074. On May 26, meanwhile, Sotheby’s Paris will auction another piece of the designer’s legacy: furniture and objets from a line designed by Lacroix, Elizabeth Garouste and Mattia Bonetti in the late Eighties for the Lacroix couture house on the Faubourg Saint-Honoré. Items range from sofas to portable changing rooms.

FRENCH LESSONS: When Carla Bruni-Sarkozy last visited the U.S., it was a practically a clean sweep for Dior, one of the French First Lady’s preferred fashion labels. On Sunday, as she accompanied her husband, French President Nicolas Sarkozy, on an official visit to the States and took in a lunch at the Boathouse restaurant in New York’s Central Park, she toted the French brand’s new 3-D bag, which made its debut on the runway earlier this month. The French Presidential couple heads to Washington today, where they will be invited to the Obamas’ private apartments in the White House for dinner.


FEVER PITCH: Nike has collaborated with six young artists to come up with alternative kit, dubbed “True Colors,” for six of soccer’s hottest teams: England, South Africa, Brazil, The Netherlands, France and the U.S. Each kit plays on the teams’ traditional colors and items include hoodies, shorts and coordinated footwear. Brazilian graffiti artist Nunca was inspired by a type of graffiti native to São Paulo known as Pixação, while French illustrator and artist So Me, nee Bertrand De Langeron, created a colorful mascot that is in the shape of a Frenchman complete with beret and moustache. Nike also created an exclusive capsule collection for the Brazilian team, using black with flecks of yellow to denote the national teams colors.

The Brazil Black Pack collection is available at Nike stores and prices start from 80 euros, or $107 at current exchange. The True Colors collection will be available ahead of the World Cup at Paris boutique Colette in May. Nike also designed new national team shirts for Portugal, South Korea, Australia, New Zealand, Serbia and Slovenia.