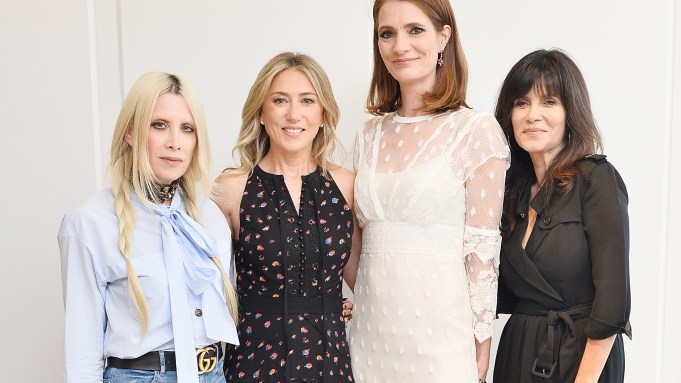 “I have been here since Sunday, which is the first time I’ve spent more than one night somewhere,” said Sykes of her travels to New York, Boston, Chicago, Detroit, Houston, Manhasset and San Francisco. “I managed to get a little shopping in.”

The British author said she’s been in paradise shopping for L.A.-brand jeans and T-shirts, particularly the Wildfox “because they are so soft my children go mental for them. If you think they are overpriced here, try in London.” She even hit the Madewell store at The Grove, saying the accessible shopping was “blissful.” “If you want to buy a 20,000-pound beaded Tom Ford dress for a wedding in Bombay, London’s got that. It’s so over-the-top now,” she noted.

Of ending her 10-year book hiatus, she said she’s been enjoying all the direct messages from readers via social media. Next, she’ll launch the book in London with a June party sponsored by Chanel, then return to the U.S. in July for some events in the Hamptons and holiday with her sister Lucy.

Sykes said she was grateful to have fashion sponsors for her book tour, but it’s a mutually beneficial relationship. “It’s been quite interesting seeing the Burberry clientele come to get the book signed. They dropped a lot of money while holding a glass of Champagne. With the retail situation at the moment, stores have to have events all the time. [Retail developer] Jim Rosenfield told me they’ve become entertainment venues. The only way to get business is to have concerts and parties and stuff. But I’m lucky because the influencers aren’t going to come to signings in book stores. You have to do multilayers these days.”