Alicia Keys will make her design debut later this month. 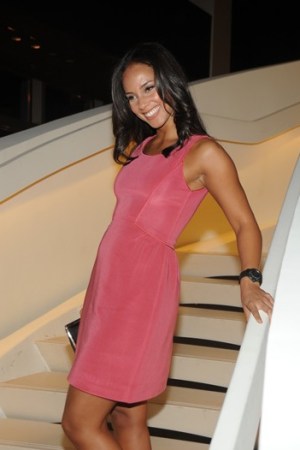 POP-UP STAR: Alicia Keys will make her design debut later this month. The 12-time Grammy Award winner has collaborated with jewelry designer Gisèle Theriault to launch The Barber’s Daughters Jewelry. The collection of silver jewelry, with positive inscriptions of poetry and prayers of Dr. Masaru Emoto (the author of “Hidden Messages in Water”), will launch Nov. 23 and 24 at a pop-up store located at 26 Clinton Street in lower Manhattan. The jewelry brand is part of the new company AK Worldwide, which will handle the singer’s nonmusical endeavors. Keys will make an appearance on the 24th. No word on whether she’ll belt out one of her soulful ballads.


This story first appeared in the November 10, 2009 issue of WWD. Subscribe Today.

DVF DOES CHICAGO. Leave it to DVF to leave a crowd speechless. “Are there any questions?” Diane von Furstenberg asked a surprised crowd of some 300 Windy City women who gathered for cocktails and a glimpse of the designer’s “Her Name is Rio” 2010 resort collection on a makeshift runway at Neiman Marcus along Michigan Avenue last Thursday. After the audience regained its composure, the designer answered questions and discussed her beginnings in the fashion business before posing for numerous photos with customers and store employees. In addition to connecting with customers, DVF made the most of her time in the city, “smelling out” sites for a potential DVF store and dropping off a few dresses with Ikram Goldman (the First Lady’s unofficial stylist). The visit, however, was definitely less dramatic than her recent trip to Spain when von Furstenberg was taking pictures outside the Thyssen Museum when her wallet was stolen from her pocket. DVF tweeted about the robbery and was shocked by the feedback. “It was all over the newspapers,” she said. “I felt bad giving a bad name to Madrid.”

REPUBLIC PARTY: Banana Republic isn’t exactly known for being a glitzy label, but on Wednesday the brand is enlisting a little star power to help celebrate the opening of its new SoHo store. Mary Louise Parker is scheduled to stop by with her musician beau Charlie Mars, who will perform for guests. The bash will also kick off Banana Republic’s ONE + ALL initiative, which promotes volunteering within communities.

ECO CHIC: High-end sustainable fashion is finally attainable. That’s the verdict issued at Opportunity Green, a two-day conference held last weekend at UCLA. At Saturday’s panel titled “When Sustainable Design and Business Converge,” Julie Gilhart, senior vice president and fashion director of Barneys New York, said the recession hasn’t crimped sales of Barneys’ eco-friendly lines, although they are generally more expensive than conventionally produced merchandise. For instance, Barneys sells one bag that is made of hemp and recycled leather for $300. “We have reordered it about 20 times,” she said. “We just sell this great bag.” Gilhart said Barneys is seeking new eco collaborations and products, but remained tight-lipped about details. “There’s not one person I want to do [the collaboration with] more than another,” she said. Zem Joaquin, founder and editor in chief of Ecofabulous magazine, also welcomed the evolution of design in the eco world. “Three years ago, you could not find hot, sustainable fashion,” she said. “You could find sustainable fashion, but it was anything but sexy.”