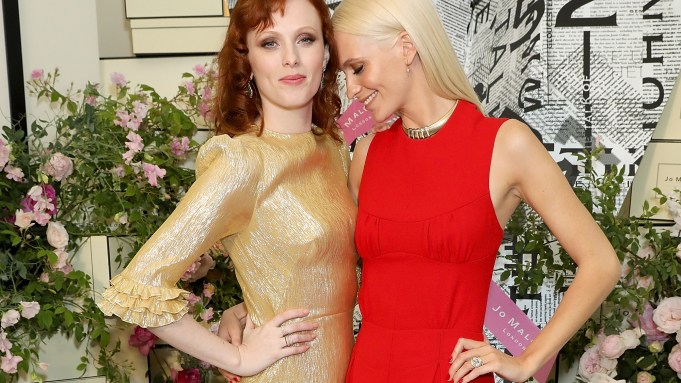 TOWN HOUSE PARTY: Jo Malone London opened the doors to its Marylebone town house on Thursday night, to celebrate its new editorial platform “The Talk of the Town House” and all things British.

Despite the ongoing rain showers in the British capital, the brand pulled out all the stops to keep guests’ spirits up, filling its elegant 18th-century Marylebone town house with elaborate flower arrangements, gigantic Instagram-friendly paper planes, waiters in newsboy caps and a tequila bar.

The party’s set-up did the trick as guests, which included the likes of Emilia Wickstead, Courtney Love, Alice Temperley, Chelsea Leyland and Natasha Zinko, let their hair down moving between the dance floor and the tequila bar.

“That’s the ethos of Jo Malone, it’s very English but it’s also very chic. You can let your hair down in the evening but at the same time be an elegant lady during the daytime. We are all those things, aren’t we?” said model and brand ambassador Karen Elson, who was cohosting the party with longtime friend Poppy Delevingne.

Delevingne and Elson also star in the campaign that marks the launch of the brand’s new platform, which includes a digital site and a newspaper. Both said they wanted to embrace the opportunity to be portrayed in a more natural, laid-back way.

“I’m primarily known as a high-fashion editorial model and working with Jo Malone gave me the chance to be more myself instead of a silent face in front of the camera. Often fashion and beauty companies do not recognize that in me, so it’s really fun to be in a position where my personality can be part of my work. Because we’re quite full-on women, we’re forces of nature,” Elson said. “I always think that natural beauty is the most perfect and gorgeous form of beauty. I’ve been done every which way but I’m most comfortable in being myself. The beauty of working with Jo Malone is that it really focuses on who I am and who Poppy is versus transforming us into this something else.”

Both models claimed to be die-hard fans of the Red Roses fragrance and recommended the brand’s Vitamin E body scrub as “a game changer.”

“My mother wore Jo Malone when I was growing up, so it has always been woven into the fabric of my life. Tonight I wore Amber Lavender, it’s my husband’s favorite and we were getting ready together so I sprayed it on the both of us — just a little cheesy detail,” added Delevingne, who is also gearing up for the release of “Kingsman: The Golden Circle” where she stars alongside Halle Berry and Julianne Moore.

She is also featured on the cover of the launch issue for the “Talk of the Town House” and inside she shares her best hosting tips with friend Alice Naylor-Leyland. “I think it’s brilliant, it gives you an insight into the world of the brand and all the different people who come in and collaborate. Some of us are actors, interior designers and artists, florists, everything you can imagine.”