The fashion company said it has teamed up with American photographer and artist to set up a roving exhibition debuting in Milan.

By Alessandra Turra on May 16, 2014
View Slideshow 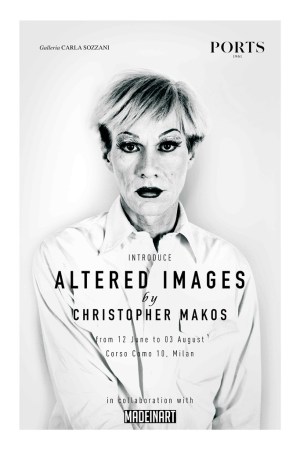 ALL FOR ART: Ports 1961 is launching an artistic project. On Friday, the fashion company said it has teamed up with American photographer and artist Christopher Makos to set up a roving exhibition debuting in Milan at 10 Corso Como’s Galleria Carla Sozzani on June 12. Named “Altered Images by Christopher Makos,” the retrospective will include 620 of the most representative pictures shot by Makos, who, after following his teacher Man Ray in the Seventies, documented the vivacious scene of New York in the Eighties, where he met Andy Warhol, who defined him as “the most modern photographer in America.”

Highlighting the tight relationship between Makos and the master of Pop Art, Ports 1961 creative director Fiona Cibani chose three pictures by Makos, featuring portraits of Warhol posing as a drag queen, to decorate the pieces of a limited-edition capsule collection celebrating the exhibition. These will include a women’s and men’s T-shirt, a unisex oversize sweatshirt, and a sweatshirt dress, all decorated with a special digital print on two layered fabrics, along with side gold zippers and white poplin cotton edges. The capsule, which will retail from 100 euros, or $137 at current exchange rate, to 250 euros, or $343, will also include small accessories, such as a shopper.

“This is a raw passion project for a more intimate, sophisticated target,” said Ports 1961 global general manager Salem Cibani, who also revealed that Fiona Cibani designed special items paying tribute to the cities hosting the exhibition. These are New York, where the retrospective will open in September, followed by London and Paris. Then, between November and December, it will make stops across Asia, in Tokyo, Seoul, Hong Kong and Shanghai.

To celebrate the launch of the project, Ports 1961 will throw a cocktail party at the Galleria 10 Corso Como on June 11, which will be followed by a dinner in the presence of Fiona Cibani and Makos.