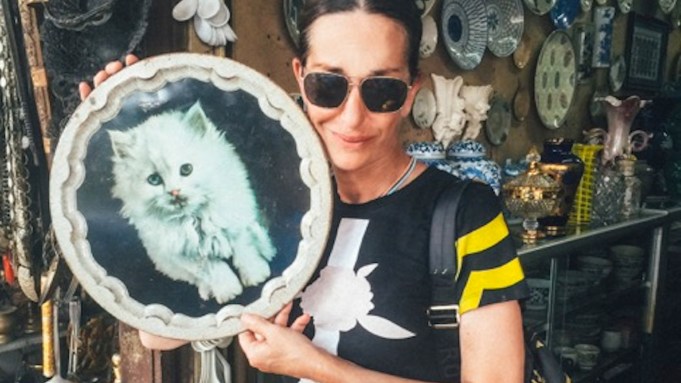 GREETINGS FROM JAKARTA: Cynthia Rowley traveled to Jakarta last week to open a shop that will house her new home collection as well as a selection of ready-to-wear and accessories (but not before taking a pit stop in Qatar and trying her hand at fly-boarding.) Rowley’s 160-piece home furnishings collection, which launched last summer, hit stores worldwide in April.

Below, Rowley’s postcard from her stay in the Indonesian capital.

Did you ever see those pictures of Leonardo DiCaprio hovering above the waters of Ibiza attached to a jet pack? Well, it’s not as easy as he makes it look (Google “news anchor jet pack fail” for a more realistic rendition). I was on my way to Jakarta to launch a new furniture collection, but wanted to see Qatar along the way. Fly-boarding might not be an obvious layover activity, but why not make the most of it? It was exhilarating to be splashing around the Persian Gulf, but incredibly hard to stay upright, especially in the 110-degree heat. The water was a balmy 90 degrees.

Back onshore, I learned that their national sport is falconry. I love when countries have unexpected regal sports as their calling card, the way Bhutan is known for its archery. As I was only in Qatar for 10 hours total, I couldn’t swing the full desert experience; however, I did manage to quasi-scam a pet store clerk into letting me hold his falcon by asking a million questions: “Exactly how heavy are the birds, sir? Are the gloves peck proof?” I took a taxi to Souq Waqif near downtown Doha for a speed-round of fabric shopping before hopping a plane to Indonesia.

The next day, there was a nice opening party at the store. Later, I met with the director of Jakarta Fashion Week at the new Four Seasons hotel and then skipped over to Cafe Batavia in the old Dutch colonial section of the city, where the walls are covered with vintage photographs of movie stars and aging dignitaries. It was interesting to see how the locals combine traditional Kebayan style with European influences. In our ever-increasingly homogenized world, it’s often at the edges of a culture where you find its true flavor, whether it’s the manner in which they adorn a horse’s mane or what passes for in-store merchandising.