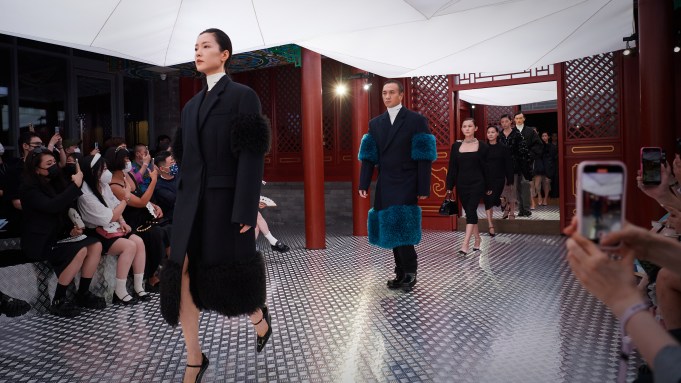 BEIJING — All the stars aligned for Prada.

Echoing the original Milan shows that featured celebrities such as Hunter Schafer and Kyle MacLachlan, the Beijing repeat of Prada’s men’s and women’s fall 2022 collections surprised with some of the most high-profile Chinese film stars in the industry.

Prada worked with AMO to transform the space. Geometric lighting systems and industrial non-slip metal flooring both add a touch of modern grit to the ancient red-bricked palace and its back garden.

In Yihan “Chace” Zhu’s eyes, the popular alternative rock band Mandarin frontman and DJ, elements of juxtaposition from Depeche Mode’s soundtrack further transformed the space. “Electronic elements go with the angular edges found in the clothes,” he told WWD after the show.

“The music and a lot of the design remind me of Robert Longo‘s works and the ‘Pictures Generation’ as a whole, the vibe is purely New York City in the ‘80s,” said Philip Tinari, director at the UCCA Center for Contemporary Art.

For Mia Kong, the Shanghai-based influencer and stylist, casting made the day. She was able to let out her inner fangirl when she saw Liao Fan march down the runway. “The casting showed the intellectual side of China‘s celebrity scene,” Kong said.

“The casting is unexpected but makes total sense; it adds a renewed sense of fantasy to the clothes,” added Chinese designer Xander Zhou.

After the show, guests were ushered onto the back garden, a Chinese-style villa full of kiosks and corridors built atop serene fish ponds. Bathed in Prada’s pink florescent lighting, they nibbled on Prada-embossed ice creams and Beijing Rice Rolls while enjoying the lush scenery. “I think this is the first industry gathering for many people in a long time,” Zhou said. “At times like this, we need a chance to get together in real life.”

Prada’s Beijing event came at a time when the capital city still maintained strict COVID-19-related regulations to stay in line with the “dynamic zero” policy. Bars and music venues remain shuttered, while regular testing is required for people to enter public venues.

Prada became the first luxury brand to host a physical runway show in China this year. According to local industry insiders, Louis Vuitton might be the only other brand with plans to produce a fashion show in the country this year.