Prada is feting its signature Galleria bag with “The Postman Dreams,” a series of five short movies directed by Autumn de Wilde. 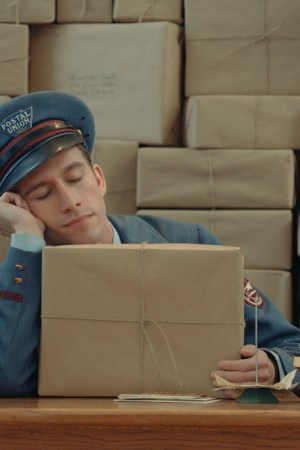 Prada is feting its signature Galleria bag with “The Postman Dreams,” a series of five short movies directed by Autumn de Wilde. Three of the films were released on thepostmandreams.prada.com on Tuesday. Infused with surreal, ironic and sophisticated atmospheres, the short movies, featuring a soundtrack by Los Angeles-based nouveau-gypsy band The Blasting Company, are all linked but can be viewed in any order. “The Prada world that I built is a dreamscape of childhood desires mixed with adult fantasies,” said de Wilde. “The best part of fashion is the childlike obsession with beauty, it retains an innocence, and that’s what makes me feel inspired.”

“The Postman” begins the series with a postman who falls asleep at work and starts dreaming about people and situations. This character also appears in “The Makeout,” where a Prada bag becomes a symbol of the desire between a young couple, as well as in “The Battlefield,” where a child, Filippo, is seen playing with the objects in his mother’s Galleria tote, its artisanal internal details unveiled through close-ups.

To be released later this month, “The Three” and “The Laundromat” will feature a biker and a pin-up as protagonists, respectively.