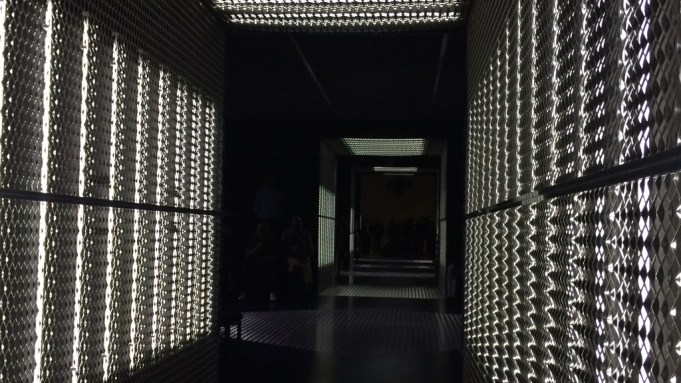 For her men’s fall 2015 show, models filed briskly through a series of rooms wallpapered with vein-y marble, with the low ceilings, floors and corridors clad in aluminum plates.

Always combining fashion and art, for the men’s fall 2014 show Prada constructed a multitiered platform of steel and dark felt, ringed by metal scaffolding — the idea being to evoke a theater setting — underscored by musical excerpts from Pina Bausch dance performances. The soundtrack lurched between Nina Hagen, German music from the Thirties and live jazz.

For her spring 2014 women’s outing, Prada put together a majestic show inspired by German avant-garde culture: musicians played live excerpts from Kurt Weill and while Barbara Sukowa, who starred as the chanteuse-prostitute in Rainer-Werner Fassbinder’s “Lola,” crooned on the soundtrack. The set was an austere gray industrial stage surrounded by metal scaffolding.