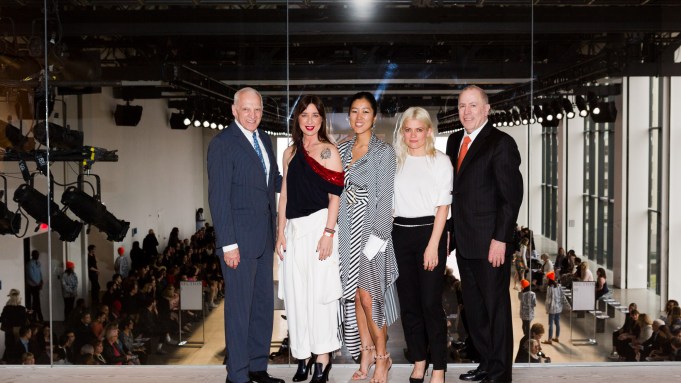 Laura Kim and Fernando Garcia know what it’s like to hustle. “We knocked on everyone’s door in fashion, even people we had never met before. We found them on LinkedIn and Google and asked for advice and support,” said Kim on Thursday evening, accepting Pratt’s 2017 Fashion Visionary Award at her alma mater’s 118th annual graduate fashion show and awards.

She and Garcia are still going door to door, but now people are soliciting them: A half hour before the Pratt show began, the co-creative directors of Monse and Oscar de la Renta were at The New School’s Parsons School of Design for a panel discussion with their fellow 2017 CFDA Fashion Awards Swarovski nominees and Kenneth Cole. Garcia made the Pratt show just under the buzzer.

This is what living the dream looks like, kids. And it’s why Pratt president Thomas Schutte chose Lim, who graduated with a BFA from Pratt in 2004, and Garcia, who attended Notre Dame, as the recipient of this year’s award. “They truly represent all that Pratt students can accomplish,” Schutte said.

Of the 45 students in the graduating class, 14 were selected to present looks from their collections, many of which reflected a major deconstructed, street influence. Lyudmila Sullivan showed raw patchworks of multiple printed fabrics. Jessica Li featured deconstructed denim and gingham. Seokwoon Yoon focused on bleached denim.

“The assignment was to create a cohesive, authentic collection that has a strong point of view and a cultural message — fashion as an advocate for change by abstracting assembly and finding new silhouettes,” said Jennifer Minniti, Pratt’s chairman of the fashion department. A yearlong critiquing process and jury selection determined which students would participate in the show.

“Putting this graduate show together for me 13 years ago was probably one of the hardest things I’ve done. It really prepped me to work in the New York fashion industry. It was a great privilege for me to attend Pratt and live in New York. Here, you can dream up anything you want and if you really go for it, the opportunity is there for anyone. That’s how Fernando and I started Monse,” Kim said.

After the show, Pratt hosted a private dinner at the Soho Grand Hotel for Kim and Garcia, as well as faculty and a few students, whom dean of the School of Design Anita Cooney put on the spot, asking them to detail their plans for the future. Anwar Roberts planned to clock some time working for another designer/brand before thinking about starting his own line. Erik Goldberg was more eager to do his own thing. A recent issue of i-D with a fashion story titled “Creativity Will Save Us All” had struck him. “I think New York needs that now,” he said.