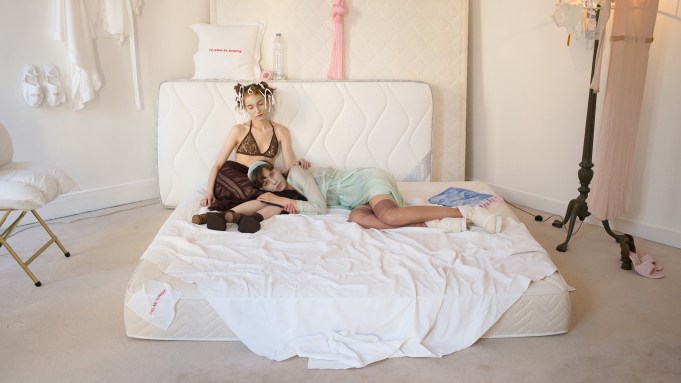 NORTHERN LIGHTS: Finnish fashion is having its moment, and the four labels showing at the Pre Helsinki House installation on Wednesday evening are keen to be a part of that.

“A few years ago, nobody in the international fashion world knew where Finland was,” said Pre Helsinki partner Maija Juutilainen. “Now it’s completely different; people are coming here to see Finnish designers and collaborate with them in different ways. It’s important to give credit to the incredible education at Aalto University, which is part of the reason we have incredible designers today,” she added.

The installation was staged as a performance within a Haussmanian apartment, with each room showcasing a different designer.

“It’s essential to be here,” said Lilli Maunula, one half of design duo Juslin Maunula, participating for the second time. “In Finland, as a fashion designer you are so isolated. You’re not in the middle of things like everyone else is.”

Saara Lepokorpi, the designer behind the Lepokorpi label, took the performance element of the installation literally, showing her Band Aid-inspired designs (her spring collection was motivated by her recent divorce) on two performance artists who were singing along to karaoke songs about broken hearts. “It’s about splitting things apart and putting them back together again in a better way than before,” the designer, participating for the second time, explained. “In Paris it’s very difficult to attract audiences as a new international label, but this time it seems busier,” she observed.

In the living room was Hanne Jurmu, who together with Anton Vartiainen won the special mention of the jury and the Chloé prize at this year’s Hyères International Festival of Fashion and Photography. Jurmu presented her first solo collection, part of her thesis for her masters at Aalto University’s School of Arts, Design and Architecture. Her designs are based on the idea that clothing’s inherent value increases as it ages and gains a history, and several of them incorporate recycled items from her own wardrobe, giving them a vintage rag-doll feel. Each unisex design is intended to tell a story, and was displayed alongside a related book.

In the bedroom, Aamu Salo’s installation was built around parts of mattresses and blankets, panties worn as bonnets and day-to-nightwear in pastel shades. “I like twisting objects and their functions,” the designer, showing for the first time in Paris, explained. “This is a way to present my work that is not so traditional.”

The Pre Helsinki organization works to promote the internationalization and export of Finnish fashion and was founded in 2013. To coincide with the Paris presentation, Pre Helsinki has put together an exhibition featuring all Finnish winners and finalists of the Hyères Festival between 2006 and 2016 at Paris’ Institut Finlandais. The exhibition and a related pop-up shop will remain open until the end of October, and can be found at 60 Rue des Ecoles in the fifth arrondissement.

From next spring, Juutilainen said the organization hopes to participate twice yearly in Paris Fashion Week — currently it only takes part for spring collections.

Next month, it will participate in Shanghai Fashion Week for the first time with the aim of further building renown around the world for Finnish fashion.