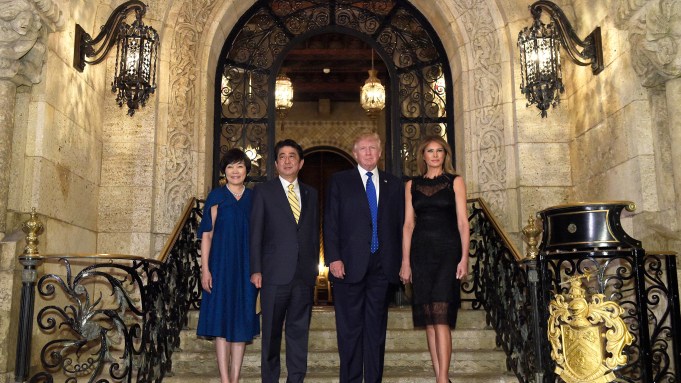 SATURDAY AT THE TRUMPS’: Amidst reports of North Korea firing an intermediate-range ballistic missile, the president and first lady stepped out solemnly with Japan’s Prime Minister and his wife tonight in Florida. After a full day of golfing, a private tour of the Morikami Museum and Japanese Gardens, a light lunch and some official business, the first couple wound down their Sunshine State weekend by hosting a private dinner for Japan’s Prime Minister Shinzō Abe and his wife Akie.

Prior to the dinner, Trump ignored a question shouted by reporters about the North Korean missile launch (although both he and Abe addressed it later) as well as one about whether he planned to watch “Saturday Night Live.”

Ivanka Trump and Jared Kushner were seen emerging in formalwear before the appearance at the main entrance by President Trump, Prime Minister Abe and their spouses at Mar-a-Lago. They headed to a waiting black SUV that whisked them off, according to pool reporters.

While the dinner at the resort was held in honor of the Japanese delegation, Trump and Abe were undoubtedly distracted by the news of the North Korean missile launch, which they addressed shortly after the dinner.

“I just want everybody to understand and fully know that the United States of America stands behind Japan, it’s a great ally, 100 percent,” Trump said.

“During the summit meeting that I had with President Trump, he assured me that the United States will always [be with] Japan 100 percent, and to demonstrate his determination as well as commitment, he is here with me at this joint press conference,” Abe added, according to a pool report.

In the past month or two, the president and first lady have forged a well-worn path to Mar-a-Lago where Saturday’s diplomatic bread-breaking was held. The president kept his signature look a dark suit and more vibrant blue tie, and the first lady was not to be missed wearing in a sleeveless black dress with lace inset. Earlier in the day she kept things considerably more casual wearing a sleeveless white cashmere knit Calvin Klein dress from the spring collection, which was the finale for Francisco Costa who has since been succeeded by Raf Simons. The former model also played down her height, wearing nude-colored patent leather flats during the tour of the 16-acre gardens.

FLOTUS had also selected another American powerhouse sportswear label for Friday’s Air Force One flight to Florida. Her Michael Kors flight-ready ensemble consisted of white wide-leg trousers, a black buttoned blouse and a black double-breasted coat. Perhaps taking a page from predecessors like Teddy Roosevelt who weekended at Sagamore Hill, or former Presidents George H.W. and George W. Bush who retreated to their family’s oceanfront home in Kennebunkport, Maine, the Trumps like the lay of the land in Mar-a-Lago — which is where they also celebrated New Year’s Eve.

As his 24.6 million Twitter followers can attest, the president doesn’t require a lot of sleep. Those nocturnal tendencies would have been welcome nearby at the home of one of his senior advisers Stephen A. Schwarzman of the Blackstone Group, who was celebrating his 70th birthday with 400 hundred of his nearest and dearest. Another former president also planned to skip the festivities — Bill Clinton was in town as well, according to one insider.

White House press reporters were still in the dark Saturday as to when the president and first lady would jet back to Washington, D.C. One of the things at the top of the president’s checklist Monday will be a bilateral meeting with Canadian Prime Minister Justin Trudeau, followed by a lunch with N.J. Governor Chris Christie and his wife Mary Pat on Tuesday and a bilateral meeting with Israeli Prime Minister Benjamin Netanyahu Wednesday.