Hillary Rodham Clinton, Tom Hanks and Tim Burton were among guests invited to the state dinner hosted by Queen Elizabeth II and the Duke of Edinburgh. 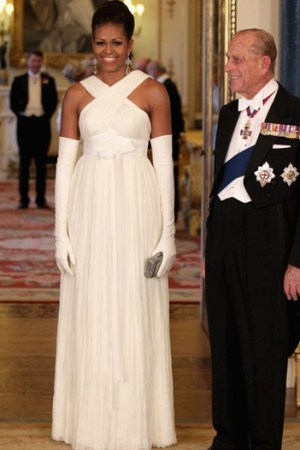 Michelle Obama chose Tom Ford to wear to perhaps one of the fanciest occasions she’ll ever attend as First Lady: a state dinner at Buckingham Palace. The guest list drew on prime ministers to film directors and the hosts, Queen Elizabeth II and the Duke of Edinburgh, were joined by fellow royals including the Prince of Wales and the Duchess of Cornwall, Secretary of State Hillary Rodham Clinton and Prince and Princess Michael of Kent. Other guests included Tom Hanks and Rita Wilson, who were invited on behalf of the U.S. State Embassy, Prime Minister David Cameron and his wife Samantha, Tony and Cherie Blair and Gordon and Sarah Brown, along with Tim Burton and Helena Bonham Carter and Kevin Spacey.

During the banquet, Queen Elizabeth, who was wearing a Stewart Parvin white evening gown, said the guests were “here to celebrate the tried, tested and — yes — special relationship between our two countries.” In turn, Obama said that he is “grateful for the solidarity that the United Kingdom has shown to America over the past decade.”

Earlier, the Obamas took London at a relatively easy pace on Tuesday, swapping gifts with the queen, laying a wreath at the Grave of the Unknown Warrior at Westminster Abbey, and posing for a photo op at 10 Downing Street with the Camerons. For the visits to Westminster Abbey and Downing Street, Michelle Obama waved the flag for British fashion, donning a plum Roksanda Ilincic dress and long, bright blue jacket. Cameron, meanwhile, wore a Peter Pilotto printed dress with cap sleeves. During the day, the Obamas also took part in a great gift-swapping session in the White Drawing Room at Buckingham Palace. They gave Queen Elizabeth a leather-bound album containing rare memorabilia and photographs from her parents’ — King George VI and Queen Elizabeth the Queen Mother — visit to the U.S. in 1939. The queen gave Michelle a rose-shaped antique brooch made from gold and red coral. She also gave the president copies of letters to and from American presidents to Queen Victoria that are now housed in the Royal Archives.