Trump recapped his tenure as president at Joint Base Andrews before jetting off to Florida.

President Donald Trump and First Lady Melania Trump walk to board Marine One on the South Lawn of the White House.

THE PARTING SHOT: Four years after President Donald Trump and First Lady Melania Trump officially arrived on the political scene in Washington, D.C., with much fanfare, their departure Wednesday morning was under considerably more subdued circumstances.

Hours before the swearing-in of Joseph R. Biden Jr. as the 46th President of the United States, the Trumps lifted off in Marine One from the White House’s South Lawn bound for Joint Base Andrews. From there, the Trumps planned to wing it to Florida. Trump is the first president since 1869 not to attend his successor’s inauguration.

Trading the White House for Mar-a-Lago may take some getting used to. The President and FLOTUS exited 1600 Pennsylvania Avenue walking on a red carpet for their final turn and photo-op. Perhaps to ease their transition to civilian life and to fortify Trump’s base, a pre-flight party was planned at JBA. The White House reportedly sent out invitations asking guests to arrive between 6:30 and 7:15 a.m. By 8 a.m., more than 100 lined the tarmac in front of a row of American flags and Air Force One. Winding down his remarks there, the outgoing president offered the next administration great success.

Wearing sunglasses, a short black Chanel jacket with gold buttons, a black Dolce & Gabbana dress, black gloves and sky-high stilettos, Melania Trump smiled as her husband spoke briefly with reporters on the South Lawn. Her ensemble could have created a déjà vu for style-minded political observers. The all-black ensemble seemed to bookend the pale blue custom Ralph Lauren bolero and dress that she wore for Trump’s swearing-in four years ago. But she was still smiling in front of supporters at JBA and addressed the crowd, before her husband heralded his accomplishments and predicted the economy would be rocketing up. “‘We’ve left it all on the field,’ as the athletes say,” Trump said.

FLOTUS wore Dolce & Gabbana for her official White House portrait, a meet-and-greet with Queen Elizabeth II and an appearance with Pope Francis a few years ago. Chanel is another favorite label. FLOTUS wore Chanel couture for her first state dinner in 2018 in honor of French President Emmanuel Macron and his wife Brigitte. En route to the G7 Summit in 2019, she shopped in her closet for a seasons-old black and white Chanel tweed jacket. 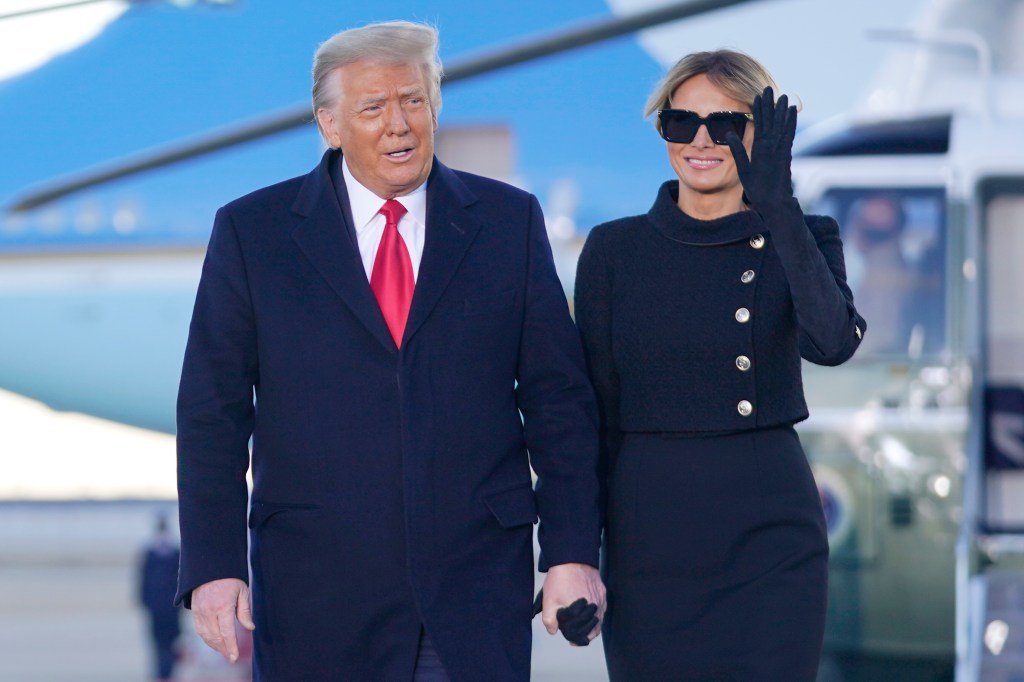 With Washington in lockdown, state capitols across the country on high alert, coronavirus cases spiking and the unemployment rate resting at 6.7 percent, any mention of inaugural day fashion may seem incidental to many. But with retail sales tanking and job security a thing of the past, the fashion sector, like other industries, is trying to regain its footing as the pandemic forges toward the one-year mark in the U.S.

While there have been rumblings of Biden leading a “Buy American” initiative, what is clear is that he and Vice President-elect Kamala Harris are champions of small businesses. In that spirit, Jill Biden sported a purple coat from New York-based designer Jonathan Cohen for a pre-inaugural event Tuesday at the Lincoln Memorial, while the Harris donned a Pyer Moss coat with an Oscar de la Renta turtleneck dress. She “loved the simplicity” of the dress, a style from Oscar de la Renta’s winter collection, a source said.

Melania Trump’s stylist Hervé Pierre, who also designed her inaugural gown, understands the scope of that kind of worldwide attention. “While a gentleman only needs four suits, one tuxedo, a couple of ties and is ready to go, that is not the case with the First Lady,” Pierre said.

As for the next chapter for the Bidens, Pierre said, “I just wish them the best. I wish that the new stylist will have a good time and will have fun with Mrs. Biden.”

By the time that Melania Trump touched down in Palm Beach County Wednesday, she appeared ready for her more relaxed status, wearing a geometric-style Gucci dress and flats.