Thirty-six outfits from current and past collections took to the runway, including iconic pieces spanning much of the designer's career. 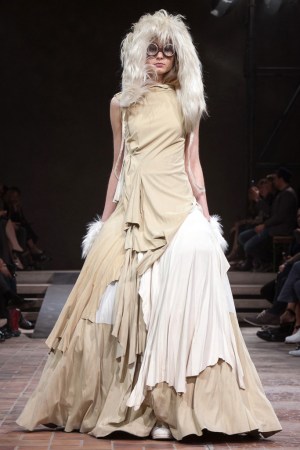 PRIME CUTS: Berlin has always been a city that likes to link fashion and art, but this season’s Gallery Weekend got an exceptionally high fashion kickoff Thursday night with “Cutting Age,” a runway show of iconic pieces spanning much of Yohji Yamamoto’s career.

Presented in the cement interior of St. Agnes Church, soon to serve as an exhibition space for Berlin gallery owner Johann König, the Audi-sponsored event drew an interdisciplinary crowd. Alicja Kwade was among the artists in attendance, joining collectors Thomas Grässlin and Christian Boros, whose wife, Karen, walked the runway; Stefano Pilati; Cameron Silver; opera singer Nadja Michael, and, most notably of all, Yamamoto himself. This was the designer’s first show of his work in Germany, outside of presentations of Y-3, his 12-year-old collaboration with Adidas,

This story first appeared in the April 26, 2013 issue of WWD. Subscribe Today.

Thirty-six outfits from current and past collections took to the runway, his signature visions in black sharing the stage with any number of highly colored stylistic riffs. While melancholy is a word often used to describe Yamamoto and his work, neither the show nor the designer lived up to that characterization. It was a beaming Yamamoto who bounced on stage to accept the audience’s applause, pointing his fingers in a “you’re the man” kind of rock star gesture.

Asked if we should consider the show “Yohji’s greatest hits,” the designer said chance had a lot to do with the selection. “We have offices in Paris and Tokyo, and it was hard to find pieces in good condition in the archives. So we couldn’t include anything from the Eighties and had to start with 1992,” he told WWD backstage after the show.

While he hasn’t changed his critical stance regarding fast fashion, he said, “I feel a sort of new wind starting to blow…because people are tired with fast fashion and too expensive accessories. In the last two years, my company’s business has been going up and up.”

And, no, he’s not the last of his kind. “It’s not a question of generation but of how hungry you are,” he said. “So new young powerful designers are coming from Eastern Europe, Korea, Taiwan, maybe Brazil.” He’s ready to welcome them, noting, “I need rivals to fight with.”

“Cutting Age” was just the first part of a four-day Yohji-thon in Berlin, which continues with “An Evening With Yohji Yamamoto” at Soho House on Friday with Yamamoto conversing with architectural designer Asif Kahn about fashion, his label, his career and what 2013 holds for him. On Saturday, the video installation “5 Cuts/A Visual Dialogue” will premiere at the creative space Made, while on Sunday, Berlin’s leading conceptual retailer Andreas Murkudis will present “Untitled Berlin,” an installation designed by Masao Nihei, Yamamoto’s longtime set designer of choice.