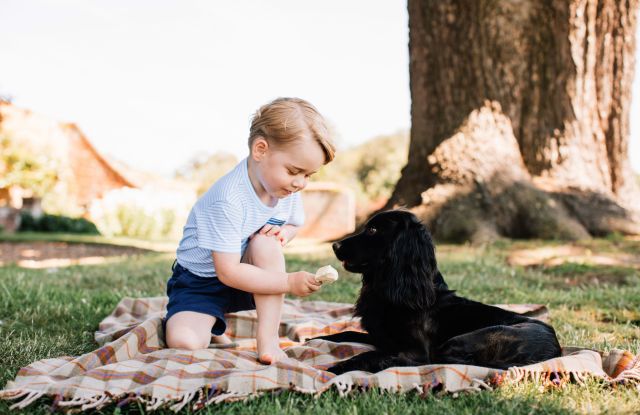 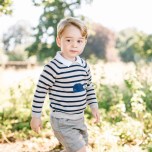 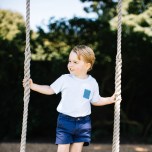 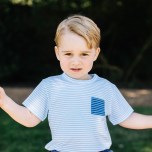 THREE’S A CHARM: Prince George Alexander Louis of Cambridge, the son of the Duke and Duchess of Cambridge, turns three today. And to mark the occasion, Kensington Palace has released four portraits of the young royal taken by Matt Porteous at the family’s Norfolk home.

“The Duke and Duchess hope that people will enjoy seeing these new photographs,” said a spokesman for Kensington Palace. “They would like to thank everyone for all the lovely messages they have received as Prince George celebrates his third birthday.”

In one of the images Prince George is pictured on the lawn feeding ice cream to Lupo, the family’s English Cocker Spaniel. Another picture shows the little prince standing barefoot on a swing, etched with “William & Catherine,” and in one other he is sitting. There’s also a photo of Prince George walking around his house.

The little boy’s parents had marked his second birthday with portraits taken by Mario Testino in the gardens of Sandringham House.

It’s been an eventful year for Prince George. Earlier this month, the duke and duchess took the little royal on his first official U.K. engagement at the Royal International Air Tattoo at RAF Fairford in Gloucestershire, England. The duchess is a patron of the Air Cadet Organization, which was celebrating its 75th anniversary.

Last month, the duke and duchess scooped up Prince George and Princess Charlotte for a family outing during a long weekend near their country home, Anmer Hall. They headed to Houghton Hall in King’s Lynn for the international horse trials, a four-day event.

To commemorate the Queen’s 90th birthday, photographer Annie Leibovitz lensed a portrait of the monarch with the youngest members of the royal family including Prince George and Princess Charlotte.

During a visit by U.S. President Barack Obama and First Lady Michelle Obama, the duke and duchess along with Prince Harry hosted a dinner at Kensington Palace. The couple was greeted by Prince George, who was dressed in a gingham-trimmed white robe from myfirstyears.com, pajamas and slippers. The duchess played with the little boy on a rocking horse gifted by the Obamas.

The Royal Mail specially commissioned a first-class stamp featuring the monarch, Prince Charles, the Duke of Cambridge and Prince George — four generations of royals posing together in the White Drawing Room — who were photographed by Ranald Mackechnie.

Prince George has also been featured in a children’s book titled “The Birthday Crown,” published by the Royal Collection Trust alongside Queen Elizabeth and Princess Charlotte. In addition, he is featured in “Winnie-the-Pooh and the Royal Birthday,” a Disney audiobook penned by Jane Riordan.

The three-year-old started at the Westacre Montessori School in January. The nursery is located near the royal couple’s home, which lies on Queen Elizabeth’s Sandringham estate. They moved there earlier this year to raise their children far from the buzz and media glare of London.