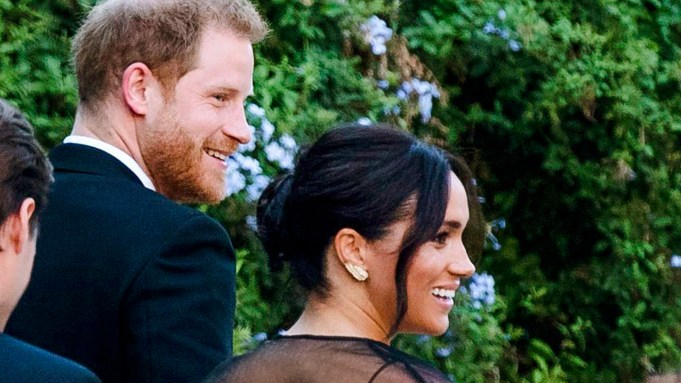 Prior to their royal tour of Africa next week — their first official trip as a family of three with baby Archie — Prince Harry and Meghan Markle have traveled to Rome for the wedding of fashion designer Misha Nonoo and energy entrepreneur Michael Hess on Friday. The star-studded wedding was hosted at the Villa Aurelia, a historic 17th-century attraction in the city.

Prince Harry and Markle — who was dressed in a navy tulle Valentino gown with crystal details — were joined by a host of celebrity guests, including Katy Perry, Orlando Bloom, Karlie Kloss, James Corden, Jared Kushner and Ivanka Trump. The wedding also saw other attendees from the royal family, including Princesses Eugenie and Beatrice, who are both longtime friends of Nonoo.

Despite their busy schedule, it’s no surprise that the royal couple traveled to Rome for Nonoo’s wedding. The designer and the duchess are close friends, recently collaborating on a charitable fashion line benefiting the U.K. organization Smart Works, which provides resources to women entering the workforce.

It’s also been reported that Nonoo is one of the close friends who introduced the Duke and Duchess of Sussex. While it’s still unclear how the connection was made, Nonoo’s ex-husband, Paddle8 auction house founder Alexander Gilkes, is one of Prince Harry’s close friends from Eton College.

Nonoo also attended the couple’s royal wedding in May 2018 and Markle’s private baby shower in New York City this February.

Everything to Know About Meghan Markle’s Charitable Fashion Line