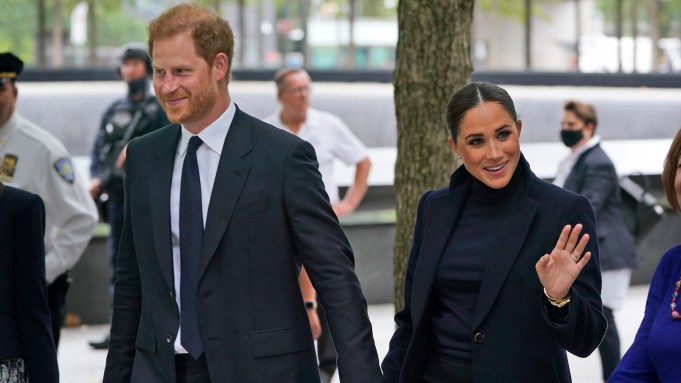 The Duke and Duchess of Sussex kicked off their New York trip with a visit to the One World Observatory, meeting with governor Kathy Hochul, mayor Bill de Blasio, his wife Chirlane McCray and their son Dante de Blasio.

“It’s wonderful to be back,” Markle said when asked by photographers about visiting New York again. Markle’s last visit to the city was in 2019 when she attended the U.S. Open to support her friend Serena Williams during a match. She also visited New York a few months prior for her baby shower for her first child, Archie.

“It’s wonderful to be back.”

— Meghan Markle alongside Prince Harry in NYC during the couple’s first joint public outing since the birth of daughter, Lilibet, in June. They join Gov. Kathy Hochul and Mayor Bill de Blasio at One World Trade Center. pic.twitter.com/WQBaAhb7vL

The Duke and Duchess of Sussex are in New York for the Global Citizen Live event, which is taking place on Saturday on the Great Lawn in Central Park. The 24-hour event is meant to raise money and awareness for global COVID-19 vaccine equity. Celebrities like Jennifer Lopez, Billie Eilish, Doja Cat, Lizzo and others will also appear at the event.

This is the couple’s latest initiative to encourage people to get the COVID-19 vaccine. The royal couple co-chaired Global Citizen’s VAX Live event in May.

The New York City trip is the couple’s first joint trip since stepping back from their royal duties last year. Their U.K. farewell tour in March 2020 was the last time the couple made public appearances together. The couple has since relocated to Montecito, Calif. with their two children, Archie and Lilibet.

More details on the couple’s New York City trip have not yet been revealed.

Prince Harry Is Writing a Memoir