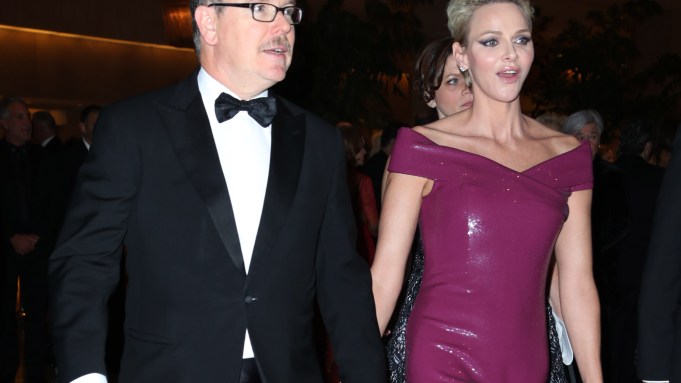 It was a busy two days for the royals, Their Serene Hignesses Princess Charlene and Prince Albert of Monaco, in Los Angeles this week. In town to celebrate the Princess Grace Awards Gala, which this year honored James Cameron, Bridget Carpenter and Dormeshia Sumbry-Edwards, the couple made a grand entrance at The Beverly Hilton on Wednesday night.

The princess donned an off-the-shoulder, plum sequined column by Ralph Lauren. Coincidentally, the name of the gown was also “Charlene.” She accessorized with dark red suede stilettos that peeked out from a slit at the back of the gown as she strode into the hotel. Prince Albert looked dutiful in his black tuxedo, sporting a new mustache that harkened back to his father Prince Rainier.

The prince was overheard telling guests that The Beverly Hilton was a special place for his mother, the late Princess Grace. There are several black-and-white photos throughout the hotel that show the former Grace Kelly at Trader Vic’s restaurant and other glamorous parties.

“She’s quite statuesque,” one guest remarked of Princess Charlene. Several guests were instructed to wait at the beginning of the carpet so that the royal couple could make their way inside for photos first. “Don’t worry folks, you’ll have a front-row view of her,” said a security guard.

The night before, Princess Charlene went solo at a gala kick-off at Paramount Studios in partnership with Nickelodeon Group that honored Stephen Hillenburg, the creator of “SpongeBob SquarePants.” Jessica Simpson was in attendance with daughter Maxwell, who greeted the princess with a floral bouquet.

For the more casual event, HSH chose a pair of black leather pants, a strapless gray wool top and a black tuxedo jacket thrown over her shoulders, accessorized again with suede stilettos.

It was a busy week for fashion events from the European set: the British Fashion Council, Galeries Lafayette and Pretty Little Thing all hosted parties the same night, and tonight Valentino will unveil a Maxfield pop-up and Cesare and Arianna Casadei will host a dinner at Chateau Marmont.

The Outnet Toasts Campaign With Amber Valletta in L.A.