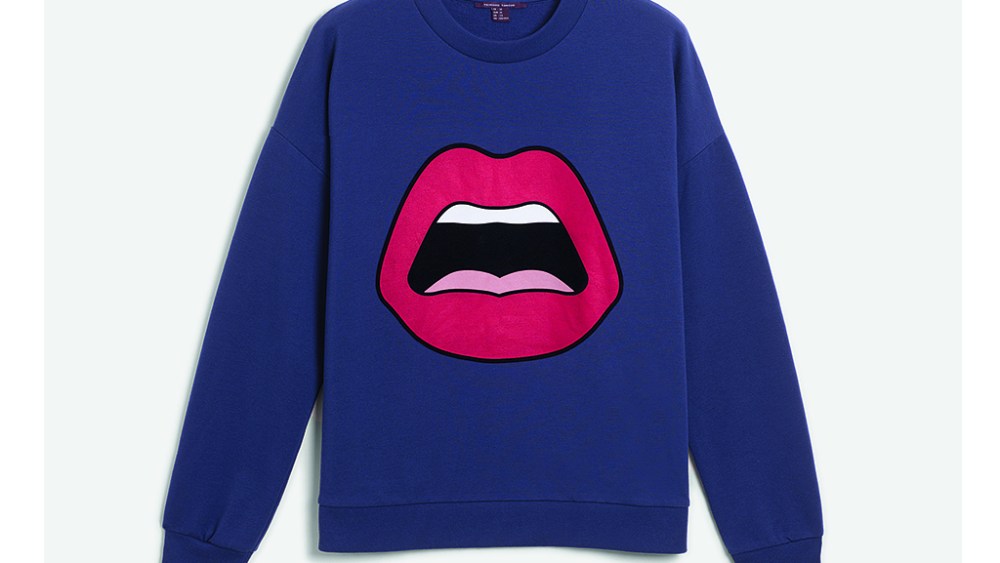 LIP-MOTIV: Yaz Bukey knows it well: lips are versatile. The Paris-based jewelry and accessories designer has applied her signature motif — the mouth open in an ecstatic expression — on a new collection of intimates.

Bukey has collaborated with Princesse Tam Tam, the French lingerie line that marked its 30th anniversary this year, on a capsule collection slated to hit counters on Feb. 3, to be followed by some swimwear pieces in April.

The Valentine’s Day-themed collection, named “Just a Kiss,” comprises two panties and one bra, both priced at 29 euros, or $32 at current exchange, and a sweater retailing at 69 euros, or $75. Lingerie pieces are made in micro modal with an allover lip motif festooned with comic strip bubbles that read: “Just a kiss.”

Announcing the brand’s first collaboration with a designer exclusively to WWD, Mathilde Castello-Branco, creative director of the Fast Retailing-owned lingerie brand, called Bukey’s universe inspiring. “She has a unique universe, yet close to our DNA: playful, feminine, glamorous — and pop,” she said.

In a phone interview from New York, where she is spending the holidays, Bukey said the line was done with a cool and nonchalant girl in mind.

“For me, lingerie is like an accessory you can play around with,” she said. “I like simple things when it comes to lingerie. A woman has so much to offer with her shapes and beauty. She doesn’t need fuss.”

The products will be sold in 139 stores in France, Germany, Belgium and Monaco.

The ebullient designer, a popular fixture on the French capital’s fashion scene, recently celebrated the 15th anniversary of her Yazbukey jewelry line, which is carried by approximately 65 retailers. She is plotting an expansion into a Yaz Café.

Her lips motif — featured on items such as Plexiglas earrings — remains a bestseller and continues to infiltrate new product lines, including ready-to-wear. “I would like to add for next season around 10 pieces in jersey including legging pants, a turtleneck top, a jumpsuit, a dress and an oversize T-shirt,” she revealed.

The multitasking designer is also creating seven pieces of furniture with Italian aluminum specialist Altreforme, to be unveiled at her next presentation during Paris Fashion Week in March and at the Salone del Mobile in Milan. “It’s a very interesting material. I can have the same lacquered effect as with Plexiglas — it’s very beautiful,” she enthused.