The spring collection focused on performance fabrics with a retro mood. 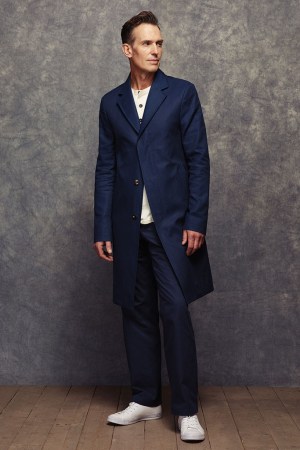 FLYING VISIT: “Techno retro” is how Nick Ashley, son of Laura Ashley and the creative director of men’s wear label Private White, described his spring collection at Private White’s Mayfair store. Taking its name from the First World War hero Private Jack White, Ashley updated traditional military fabrics using cutting edge technology. Consider the single breasted Ventile coat in the orange color found on the nose cones of Spitfires. It was rendered water-resistant via a long yarn with a high-twist weave. The fibers expand when they get wet and it was originally developed for Second World War pilots. “It gave them an extra 20 minutes before they caught hypothermia if they crashed into water,” Ashley explained. There was also a cotton safari style suit with a special coating: “You zap it with a laser which alters the molecular structure making it waterproof as well,” he noted.

Breathable leather brogues were a collaboration with Grenson, while Ashley himself was wearing cowhide desert boots he’s had since he was 15. They were a present made by Manolo Blahnik for whom Ashley worked as a shop boy, fitting shoes for the likes of Jerry Hall.