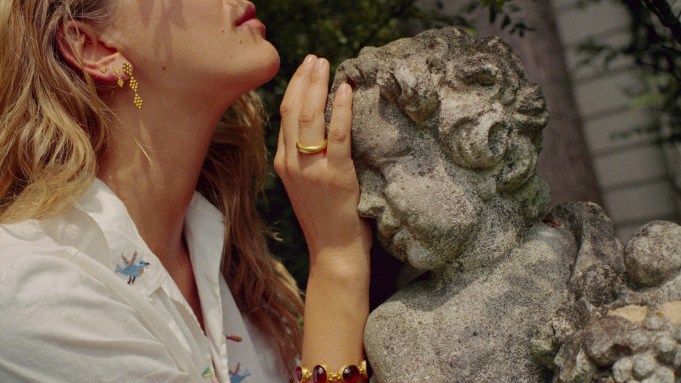 Leave it to a 24-year-old to reconsider the hard-won rules of jewelry. Jean Prounis this week introduces her namesake jewelry brand, Prounis — based not on flash and bling, but rather handcrafted subtleties and ancient goldsmithing techniques.

Formerly a studio assistant to Jemima Kirke and a design apprentice at Ghuran, Prounis focuses on unpolished gold, cabochon stones and softer-than-typical metal, which molds to reflect the imperfect nicks and knocks of everyday life.

“I felt like there was a hand touch missing in a lot of jewelry — everything I make is made in New York. I [personally] make 90 percent of what I sell and the rest is made by three very talented jewelers in the jewelry district. There was a really sterile feel in the environment and I wanted to have jewelry with character that shapes to how you wear it everyday,” Prounis said.

Handmade pieces include a braided chain necklace that takes one week’s worth of man hours to complete, priced at $13,000.

Prounis’ collection is made from 22-karat gold that mimics the chemical compositions used in ancient Greek and Roman jewelry. This ratio of gold, copper and silver allows Prounis to utilize traditional granulation techniques. Granulation — a tedious embellishment process dating back to ancient Mesopotamia — is a signature of the brand, used in hero pieces like the Duo Nona studs, in which nine granules create diamond shapes ($380 per stud).

With time, 22-karat gold warms to exhibit a certain glow — shined not by a polishing wheel, but by body heat and oils. “It shines with the wearer, I think it’s more personal that way. It’s more romantic instead of the jewelry coming pre-polished,” said the designer.

Prounis’ great-grandparents are among her influences. As the owners of New York’s Versailles Club — a high-society destination from the Thirties through the Fifties — they, too, curated a perspective of finery.

The signature sage green color of Versailles’ tablecloths are echoed in Prounis’ jewelry sachets. Each of her party and trunk-show invitations are hand-painted in watercolors — as was typical for the nightclub’s menus.

Promotional images have been photographed on Maryam Nassir Zadeh model Nane Feist. Prounis routinely Instagrams branded collages made by her artist boyfriend Levi Woods. She runs in a circle of fellow creatives, designers and artists who not only offer advice and support but are also a springboard for collaboration and retailing concepts. A holiday season pop-up with Bode’s Emily Adams Bode and Lorod’s Lauren Rodriguez is planned for December.

Prices range from about $380 for a single stud earring to $20,000 for a pearl strand necklace with a star sapphire clasp. The average price hits around $3,500 for rings and earrings. The lower-priced pieces will be stocked at Catbird beginning this week. Additional buyer appointments are being taken at Prounis’ launch event, planned for Thursday in New York.