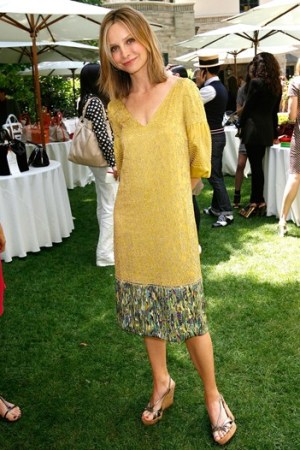 “My husband is a better shopper than I am,” said Rebecca Gayheart at Wednesday’s sixth annual Bag Lunch to benefit P.S. Arts. “I should have brought him here.”

Juicy co-founder Pamela Skaist-Levy opened her Beverly Hills estate for this year’s event, which featured designer bag bargains (the hostess also donated one of her vintage Herm&egrave;s Birkin bags to the cause).

“Come movie premiere or press junket, I always make it here,” said Kerry Washington, who had just returned from Cannes.

Other guests included Bag Lunch founders Elizabeth Stewart and George Kotsiopolous, Joy Bryant, Kristin Davis, Jessica Capshaw and Sophia Bush, who won a bidding war with Darren Star over a Dolce & Gabbana travel bag. Also on the hunt was working mom Calista Flockhart. “I’m looking for something big that I can open easily,” she said. “If it looks chic, that’s a plus.”