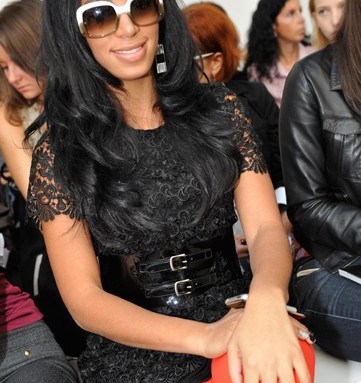 WINNIE THE PUGH: Though relishing her role as ambassador for Armani jeans, Beyoncé’s sister Solange Knowles wore a black lace mini dress by Zara for her front-row appearance at Gareth Pugh on Saturday in Paris. “The belt and shoes are Armani,” the singer-songwriter hastened to add. Knowles said she became a fan of Pugh while researching outfits for her latest video. “I didn’t end up wearing it because I couldn’t get a contact but now that I’m here, I’m definitely gonna steal some things.” Suzy Menkes’ granddaughters appear to already be in training for future fashion editor positions. Six-year-old Jessica, who showed neighboring editors her new gold shoes, and four-year-old Claudia, accompanied their granny to the Pugh show and were initially frightened by the death-metal intro. Also at the show was fellow designer Rick Owens, who said he’s showcasing a line of jewelry by Jordan Askill in his Palais Royal store during Paris Fashion Week. “I showed him
how to make black versions of his oxidized silver pieces using a chemical process,” said Owens of the line that includes a diving swallow and a rose bud.