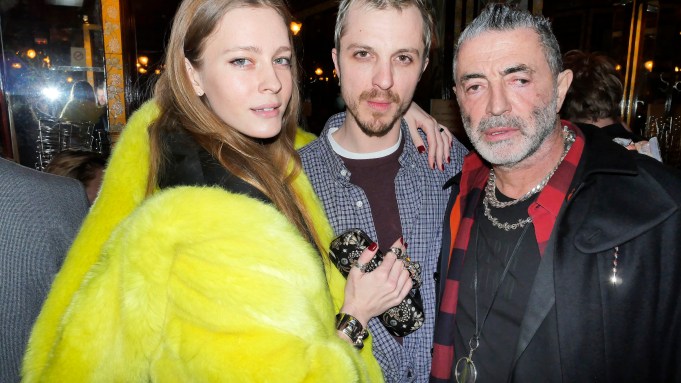 ARTY SOULS: A cheerful crowd descended on the Brasserie Lipp for a dinner hosted by Carven and Purple magazine, kicking off the evening with bubbly — beer and Champagne.

“It’s always my favorite dinner of fashion week…it’s a beautiful celebration of creativity,” said Anja Rubik, as a waiter set down a large slice of smoked salmon.

The Polish model has a lot on her plate these days — she’s releasing a textbook on sex education for teenagers in her home country, pushing the fashion industry to curtail the use of plastic and advising the new jewelry brand Mené on its image. (She also appears in its advertising campaign.)

Martens rolled a cigarette as he relayed his future vacation plans: hiking on the volcanoes of Tenerife. He sent his team on vacation and will wait for them to get back in a few weeks before heading off himself.

“You really exhaust yourself, then you have rewards,” he said, enjoying the pause in what he described as a marathon run of work since December.

“I lived through May ’68 at Lipp — when the fists starting flying, we hid here,” he said, referring to the student protest movement in the Sixties. The current crowd was made up of “real creatives,” he added, approvingly.

“There’s a slightly alternative side, with a marvelous underground feeling that I enjoy,” he continued. He also appreciated the lowered lights — not often at this venue — noting it made the women beautiful.

Olivier Zahm and Betony Vernon had just scooted their chairs closer to a table and were tucking into plates of brasserie fare, spread about for sharing, when James Goldstein walked in.

“I didn’t know it would start so early,” he said, glancing at a table where oysters were being merrily consumed. He took off his thick fur coat and prepared to order his usual at the Saint-Germain-des-Prés institution: sole meunière.