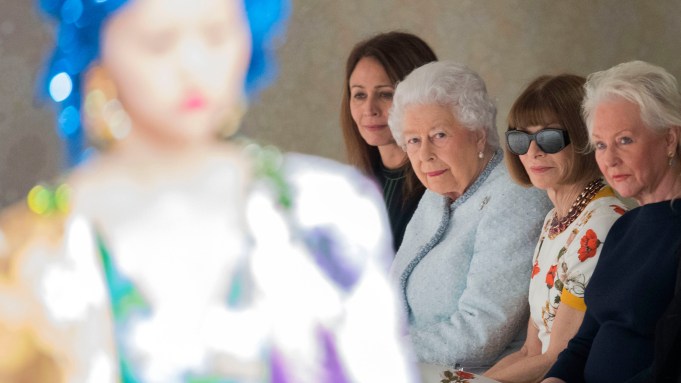 THE QUEEN AT QUINN: Queen Elizabeth made a surprise appearance at emerging designer Richard Quinn’s runway show on Tuesday afternoon as part of a visit to London Fashion Week and to present Quinn with the inaugural Queen Elizabeth II Award for British Design.

She wore a duck egg blue tweed dress and jacket embellished with Swarovski crystals. It was designed by Angela Kelly, her longtime dressmaker.

The Queen visited LFW’s Designer Showrooms to view the collections and then attended Quinn’s runway show before presenting him with The Queen Elizabeth II Award for British Design.

The award, initiated in recognition of the role the fashion industry plays in society and diplomacy, will be handed annually to an emerging British fashion designer who shows exceptional talent and originality, while demonstrating value to the community and/or strong sustainable policies, according to the British Fashion Council.

Born and raised in Eltham, southeast London, Richard Quinn holds a B.A. and M.A. from Central Saint Martins. He graduated from the M.A. program in 2016, and launched his line that year.

The young designer, who’s worked at Christian Dior, Michael van der Ham and Richard James, is known for mashing up prints with classic silhouettes, and calls his woman “elegant with a touch of edge.” For fall, he plans to feature bold prints and add a subversive edge to his collection.

This season, Quinn has teamed with Epson, where he plans to create textile designs using the firm’s digital print technology. The designer works with Epson’s Surecolor system at his studio in Peckham, incorporating digital technology to create his own styles.

Prices range from 320 pounds for tights to 3,920 pounds for a dress. His collection is sold at Matchesfashion.com, Lane Crawford and L’Eclaireur. The designer will stage a show at the BFC show space at 4 p.m. on Feb. 20.