Queen Elizabeth Sneaks Out of the Palace in Green Sequins

The British monarch made a rare public outing on Monday night for a dinner at Bellamy restaurant in central London. 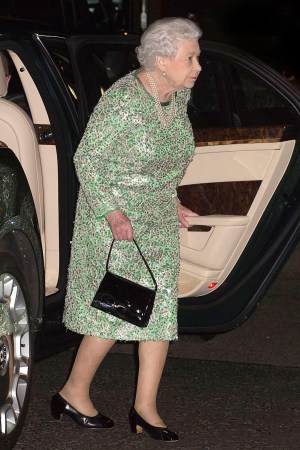 The Queen of England made a rare public outing on Monday night, slipping away from Buckingham Palace for a night out with daughter Princess Anne and cousin Princess Alexandra.

The three met for a dinner at Bellamy restaurant in central London’s Mayfair neighborhood. The women dressed to the nines for their meal at the French brasserie and oyster bar, which was closed to the public for the night. The Queen, 89, sported a lime-and-silver sequined shift dress; a triple-stranded pearl necklace and earring set, and a coordinated black patent purse and kitten heel. Her daughter Anne, wrapped up in a black cape, and her cousin Alexandra, in a full-length gown and deep purple velvet wrap, arrived at the dinner in a separate car. The British monarch will celebrate a milestone birthday next month, when she turns 90, on April 21.