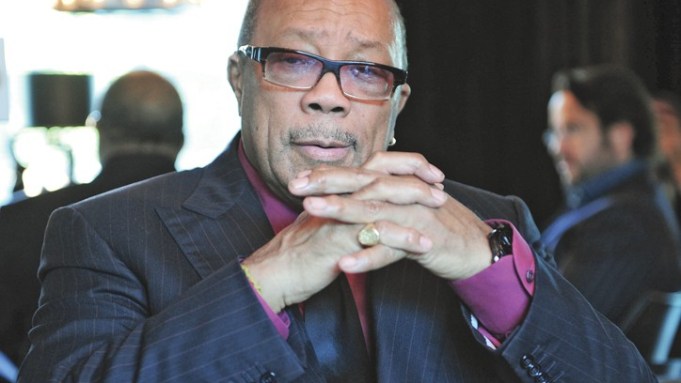 ONLY ON MARS: What do Jay-Z, President Clinton and Gorvernator Arnold Schwarzenegger have in common? They are all brand ambassadors for Audemars Piguet, which just landed its latest celebrity endorser: music mogul Quincy Jones. The company feted the prolific songwriter and producer in Los Angeles last week, where Jones showed off the limited edition timepiece Audemars made in his honor. Maybe it plays tunes from “Thriller.”

COCKTAIL HOUR: Balmain designer Christophe Decarnin welcomed a stream of fashion folk who came to check out the revamped Balmain boutique on Rue François 1er in Paris last Monday night. French singer and actor Patrick Bruel, accompanied by fellow actor Pascal Elbé, said he has an autobiography coming out this year. “We are about to run to the screening of our film,” said Elbé, referring to the yet-unreleased “Like the Five Fingers of the Hand,” directed by Alexandre Arcady.

PANDA FANS: At the Palais de Tokyo, Antoine Arnault organized the first showing in Paris of Chinese artist Jiji’s “Hi Panda” series. “I have a big panda sculpture already,” he said, adding that the very same evening he bought a painting to match. “You see that red dot over there…that’s a new one,” he said, pointing to a large Panda painting.

Having popped to Cannes the previous evening for the NRJ music awards, Pharrell Williams stopped by to see the exhibit, cocooned in a big puffer jacket and moon boots. “I live in Miami, so I am not used to this cold,” he said, adding he just scored the music to an upcoming animated film called “Despicable Man.” Other guests included actresses Catherine Deneuve and Kristin Scott Thomas.

LUCKY BREAK: Lucky Brand co-founders Gene Montesano and Barry Perlman are set to exit their operating roles at the Liz Claiborne-owned brand. The duo are in the final year of a three-year contract, which stipulated their creative director roles would be scaled back this year. Montesano and Perlman are now “nonoperating creative consultants” at the jeans company they founded in 1990. Their contracts were similar to those given by Liz Claiborne chief executive officer William McComb to Juicy Couture founders Gela Nash-Taylor and Pamela Skaist-Levy, who are also relinquishing operating responsibilities at the Juicy division. Liz Claiborne acquired 85 percent of Lucky Brand in 1999 for $113.5 million and made several more multimillion-dollar payments over the years for the remaining equity stake. On Jan. 4, David DeMattei, a former group president of Williams-Sonoma, assumed the ceo role of Lucky Brand. Patrick Wade, also of Williams-Sonoma, became executive vice president and creative director of the brand. Lucky Brand ended the third quarter of 2009 with 193 full-price stores and 46 outlets, with comps declining 18.7 percent for the first nine months of the year.

REYES ACTS OUT — ON TV: The death knell for ABC’s “Ugly Betty” show has tolled, but there is still one more industry guest appearance to come. On Wednesday night, designer Brian Reyes will make his prime-time debut, playing himself. “It’s a fashion week scene, Betty’s doing the rounds, and I happen to be at this restaurant where a show takes place,” said Reyes, who dressed actress America Ferrera for the 2007 Golden Globes. “Onion rings are involved.” The cameo is particularly meaningful for Reyes. The original “Betty La Fea” series, which inspired ABC’s version, was based out of Colombia, where his family is from. “I was a teenager [living in Florida] when the show came out,” recalled Reyes. “I watched it with my parents. It was a family ritual.” As for his acting chops, the designer noted, “I’m definitely not quitting my day job.”

TAKING A PAUSE: Two months after stepping down as art director for Hugo Boss’ progressive Hugo collection, Bruno Pieters plans to put his signature brand on hiatus. Distributors of the nine-year-old label include Maria Luisa in Paris and The Convenience Store in London. “Probably this will be difficult for some stores who supported me and believed in the collection for all these years,” he said. The designer is selling part of his archives at ra13, a new concept store in Antwerp, Belgium, with proceeds to be donated to SISP, a children’s charity in southern India.

MAYFAIR TO MEATPACKING: After its well-received Paris show, Alfred Dunhill wants to make a splash at New York Fashion Week, too. On Feb. 11, the brand will open a weeklong installation that will attempt to channel Bourdon House, its iconic Mayfair mansion in London, into a Meatpacking District space at 13th and Washington. There will be a shopping dimension to the project, but the brand said the concept is more sensory than commercial. It will showcase the fall collection by Kim Jones, who will visit New York for the launch party.