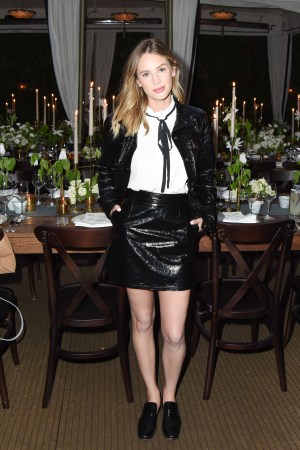 Jennifer Meyer snagged the title of hostess with the mostest on Monday night at the Chateau Marmont, where she greeted guests at Frame’s first party in Los Angeles to celebrate its new store on Melrose Place.

The award-winning jewelry designer has had plenty of experience hobnobbing with those who count. Last year, she and her husband, actor Tobey Maguire, welcomed Hillary Clinton to their Los Angeles home. In the last couple of weeks, she extended her hospitality to President Obama and Frame cofounders Jens Grede and Erik Torstensson. “I like to keep it with the most important people in the world,” she quipped. Those people don’t have to be big in stature. Malia Obama accompanied her dad to California, and Meyer said “my kids didn’t let her out of their sight.”

Other guests in view amid the candles, white poppies and menus illustrated by André Saraiva at the Chateau included Emily Ratajkowski, Rashida Jones, Jaime King, Lily Donaldson, Molly Sims, Mischa Barton and The Elder Statesman’s Greg Chait. Byredo founder Ben Gorham liked fellow Swedes Grede and Torstensson so much that he floated the idea of collaborating on a fragrance with them. “One day maybe,” he said.

The female guests could barely contain themselves when describing the jeans from the four-year-old brand. Actress-turned-QVC designer Lisa Rinna explained she bought two different sizes of the women’s ankle-length jeans that subtly flare out with a split outer seam “for the days you feel skinny and the times you don’t.” That night, she was feeling proud of herself for chaperoning seven teenagers to the first weekend of Coachella. “The fact that I’m still alive and standing and they are too is a miracle,” she said.

Rachel Zoe, a mother of two young boys, was impressed. “That’s the sickest thing I’ve ever heard,” she said, confessing that she did go to Coachella last weekend for a total of four hours to represent at her company’s oasis-themed bash. By the time the music festival returns next year, she’ll hopefully have her own line of sunglasses and handbags to sport in the desert.

Dylan Penn, the photogenic progeny of Sean Penn and Robin Wright, is playing with lots of accessories on photo shoots. “Not getting paid but shooting with really fun photographers” was how she summed up the editorial gigs. She also took a role in the movie “Elvis & Nixon.” Although not as intense as her mom’s headlining job on “House of Cards,” “I have this tiny part, like a hostess in a hotel,” she said.

Natalie Massenet, the founder and former chairman of Net-a-porter.com, hung up her hat as Web pioneer and became the supportive girlfriend of Torstensson’s. A UCLA graduate, she was catching up with college friends in the area and checking out Melrose Place, where Frame opened its first store last Thursday. Staying mum on her next business project, she said, “I’m just enjoying life.”