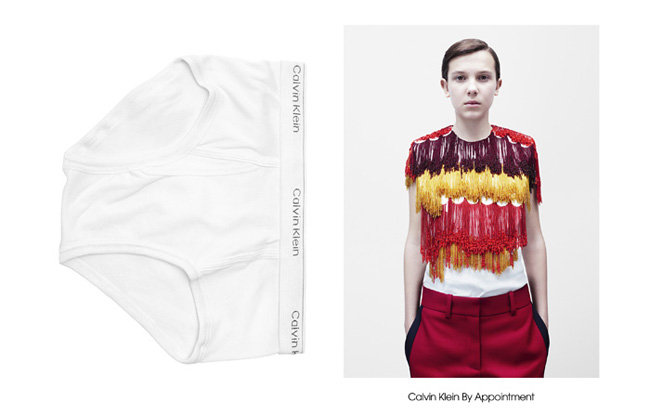 A quote from Simons, Calvin Klein’s chief creative officer, said, “Calvin Klein is not only about iconic underwear and jeans — it’s about so much more.” To that end, it sounds like the By Appointment collection is essentially couture, which would make sense given the timing of its announcement — the spring haute couture shows begin today in Paris.

“A new departure for Calvin Klein: The NYC atelier’s celebrity by appointment service becomes an individual line,” stated the brand’s web site, noting that the collection was “presented in the photographic tradition of Calvin Klein: Utilizing billboards, newspapers and the internet.”

Willy Vanderperre shot the collection on a range of models, including “Stranger Things” actress Millie Bobby Brown in a red, yellow and burgundy beaded top over red pants; Julia Nobis in a full-skirted white dress; Jamie Bochert in a floral top and matching pants; Abbey Lee Kershaw in a skirt that looks like an American flag; and Lineisy Montero in a draped blush ivory and blush look. Each portrait is shown opposite a pair of white Calvin Klein underwear briefs.

The collection will be made entirely in New York and will open for appointments on April 1.

It seems Calvin Klein and Simons took a page from Beyoncé’s playbook, posting the collection without warning on its digital channels, the way the singer did with her albums “Lemonade” and “Beyoncé.” Simons’ debut at Calvin Klein has been one of the most hotly anticipated in fashion. The brand did, however, take significant ad space in the Sunday New York Times and in WWD’s  digital daily.

Simons’ first collection for the brand was thought to be fall women’s ready-to-wear, with a show scheduled for Feb. 10 during New York Fashion Week.