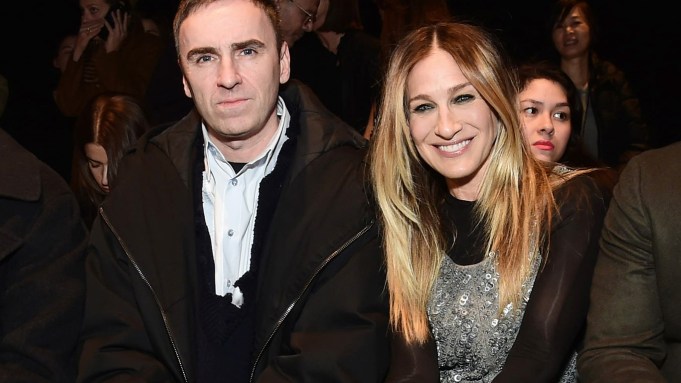 A show, a friendly meet-up and dinner with your husband: a solid Valentine’s Day for Sarah Jessica Parker, who kicked off the night at Narciso Rodriguez.

“How has my fashion week been?” she said. “I mean, I’ve not been at a lot. Just some friends and this is the last one. But it’s been exciting and I’m always happy to be able to come to Narciso’s show and Prabal [Gurung] and obviously being at the Calvin Klein show was a real treat.”

Parker called the Calvin Klein show “thrilling” and offered her thoughts on the bigger picture. “I really thought it was exciting for outsiders frankly, you know what I mean? To come and reinterpret American fashion,” she said. “I think it’s good for us and I think it’s very exciting for the industry. I was really thrilled with what I saw. Frankly it was just – it was extremely exciting. I’m happy that they’re here and I’m a longtime admirer of the brand and the house. I felt really lucky. I was sitting next to Anna [Wintour] and Grace [Coddington] and I just said, ‘Wow, we get to say we were there that day.’”

But, as the night was ultimately about Rodriguez, Parker expressed her excitement to support her “dear, dear old friend. “I’m really happy to be here tonight for Narciso,” she said. “I’m gonna run out of here and meet my friend and eventually my husband for dinner.”

Raf Simons took his seat next to Parker shortly afterwards. He had missed the kind words Parker had for him just minutes before, but perhaps she repeated some of them as they embraced and chatted until the show started.

When asked about his state of mind post-show, Simons said, “Nice relief I have to say. It’s still a bit busy now, like, lots of people want to come back to the showroom, see the collection. Meeting them very quietly and calmly, but I have to say I can’t wait to go on holiday.” Can’t we all?