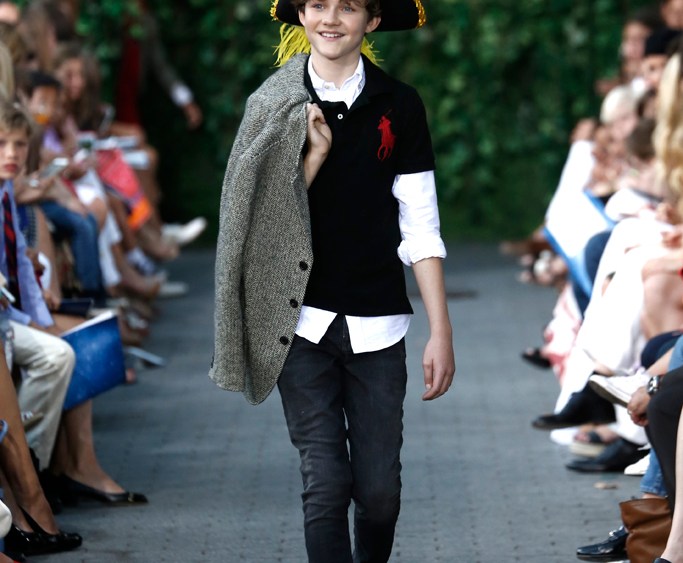 CUTE OVERLOAD: New York’s Central Park Zoo was transformed into a Neverland-themed playground for Ralph Lauren’s kids’ fashion show on Wednesday night as stylish uptown moms and their tots flooded the outdoor space to watch several dozen pint-size runway models show off looks from the fall collection. In addition to 12-year-old Levi Miller — who stars alongside Hugh Jackman and Rooney Mara in the upcoming film “Pan” — the cast also included 12-year-old Maddie Ziegler of “Dance Moms” fame. “There are a lot of rising stars here,” said David Lauren, executive vice president of advertising, marketing and communications for the company, after the show. “We cast through friends and family, but there are a couple of young people that are aspiring actors and actresses. When we did this years ago, Jennifer Connelly walked the show. And of course [tonight] there is Levi [Miller], who’s gonna be the biggest star in the world soon.”

The boys and girls collection included tons of preppy staples — such as American flag sweaters, plaid skirts, varsity jackets, herringbone blazers and sock-less loafers aplenty — but a cool skater vibe also ran throughout the looks. There were slouchy jeans, cargo jackets and hoodies accessorized with beanies, fingerless gloves and leopard slip-on sneakers. “It’s very hip, very fashion-forward,” noted David Lauren of the collection. “There are a lot of influences, and mixed with that are clothes that kids wear on the playground, like sweats, so it’s eclectic. A lot of the clothes are styles that we love for Polo and for Ralph Lauren collection, but we made them for 2- or 4-foot-tall children. It’s amazing when they barely come up to my knee.” Then — if 77 looks of considerable cuteness weren’t enough to put one over the edge — Miller closed the show by walking a gigantic Newfoundland dog named Lucy down the runway.