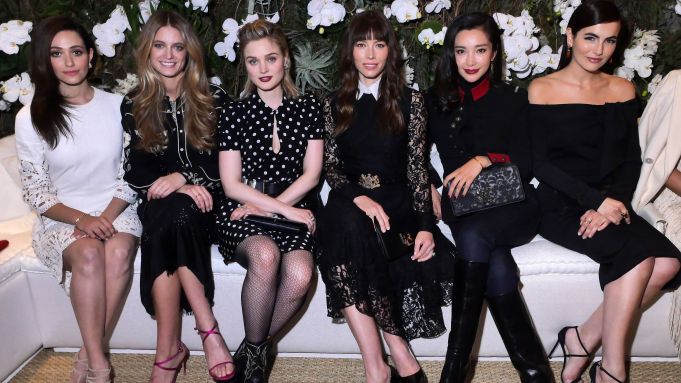 On Wednesday evening inside the Ralph Lauren mansion, it was impossible to not stop and smell the flowers. The company had covered the walls of its two-floor retail space with orchids, and the floral scent lingered as guests trickled in for the designer’s spring show.

“My girlfriends and I keep saying someone should be getting married in here, and then someone should be doing something else fabulous in here,” Jessica Biel remarked as she meandered to her seat on the second floor. “I feel like walking into a space like this, you are immediately transported to some kind of fantasy forest, or fairy wonderland. The show has already started for me,” she continued. “We’re not in New York in February right now.”

Emmy Rossum was taking a closer look at the walls of greenery. “Did you see the robotic butterflies? If you watch them very carefully, they move,” she said, pointing out one nestled within the foliage that did indeed, upon closer inspection, flutter its wings. “I actually live in the neighborhood, so it worked out really, really well,” Rossum explained of her evening appearance at the mansion. She wasn’t there only for the clothes. “I don’t treat it as scouting for outfits, I treat it as a show,” she said. “Something that has been designed, that has music and lighting and ambiance, and is really almost like entertainment in a way.”