The event will be streamed on the brand's website, and feature the women's Ralph Lauren Collection and the men's Purple Label together, as well as a performance by Monáe.

Ralph Lauren will present his next runway show with a little help from muse Janelle Monáe.

Titled “All or Nothing at All,” the immersive digital experience is slated for March 25 at 7 p.m. EDT, using the designer’s love of film, music and some tech wizardry to showcase spring 2021.

The event will be streamed on the brand’s website, and feature the women’s Ralph Lauren Collection and men’s Purple Label line together, as well as a performance by Monáe, who brought down the house at the designer’s September 2019 Ralph’s Club themed show in downtown Manhattan, his last runway presentation.

This one promises to be similarly cinematic, only with guests invited to experience it from home, as well as purchase the see-now-buy-now collections from the same screen. 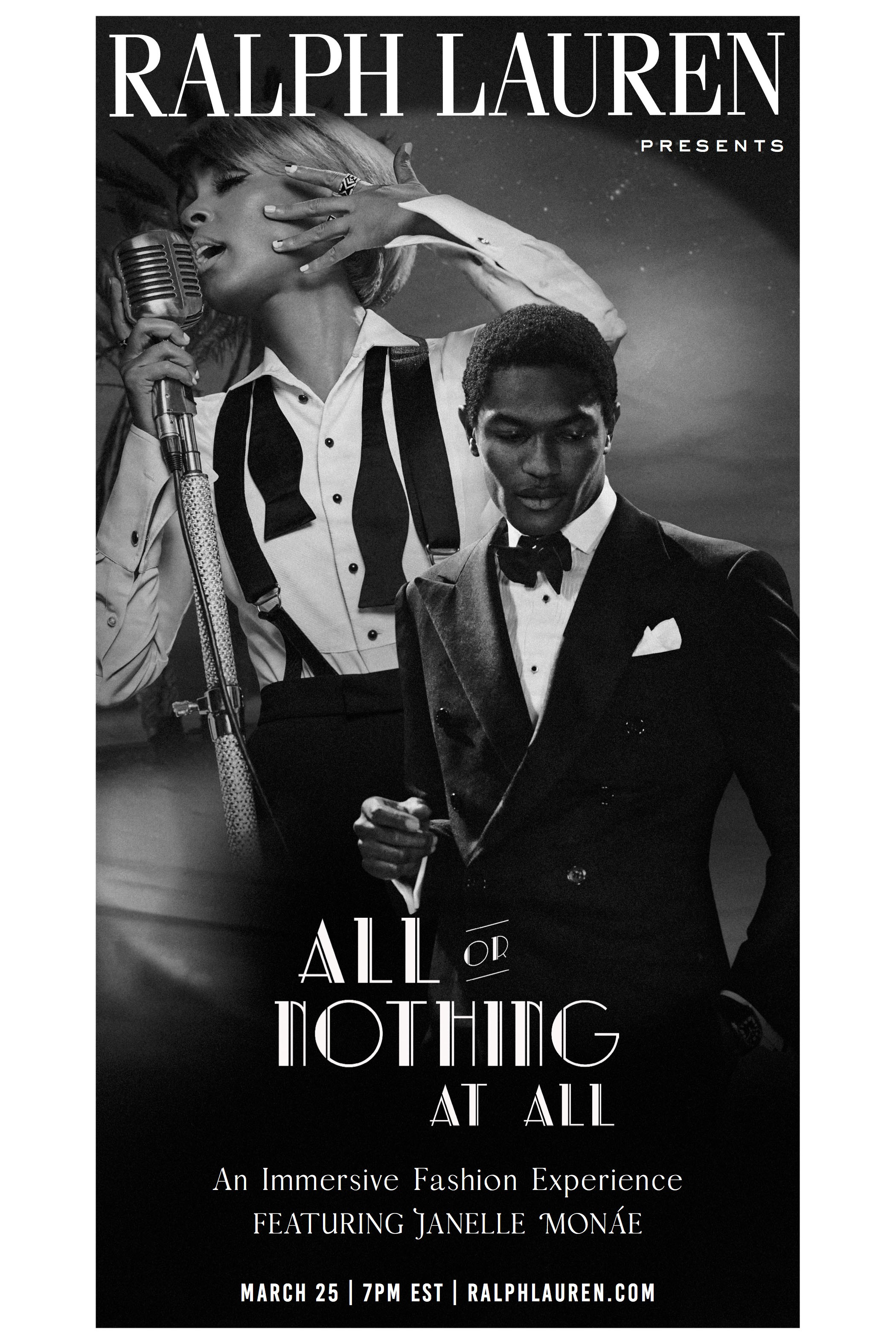 Ralph Lauren “All or Nothing at All”  Courtesy

Lauren certainly has the vision and footage to pull from for the special, should he go a similar direction as Giorgio Armani, who in September 2020 turned his fashion show into primetime TV entertainment in Italy, also offering viewers an overview of his career in fashion and pop culture through a 20-minute documentary.

Lauren was profiled in the HBO documentary “Very Ralph” in 2019, which featured interviews with Hillary Clinton, Karl Lagerfeld, Martha Stewart, Ken Burns and Kanye West. He’s spoken often about being influenced by Hollywood, particularly the films of the 1930s and ’40s he watched as a kid, and he’s made his own impact on film, through costumes for “The Great Gatsby” and “Annie Hall,” and memorable red carpet designs for Monáe, Gwyneth Paltrow and more. He even made a cameo on “Friends.”

The brand has been innovative in partnering with film and TV in recent years, too, releasing a Lauren by Ralph Lauren collection inspired by the film “Wonder Woman 1984,” and striking a Polo Ralph Lauren product placement deal with Spanish language Netflix show “Elite” that had the teen characters modeling the clothes onscreen and in an ad campaign.

Lauren has even left the door open to directing his own feature-length film someday, telling The Hollywood Reporter he always wanted to do a film about The Bentley Boys, a group of British race car enthusiasts.

The immersive show follows the company’s increased emphasis on digital marketing; Ralph Lauren opened digital storefronts akin to “walking into a movie” during the 2020 holiday season, and partnered with Snapchat on a “Scan the Polo Pony” program that unlocked augmented reality experiences. Expect something similar on the tech front for March 25.

Lauren didn’t participate in New York Fashion Week in February 2020 and canceled the show he had planned to present in April 2020 because of the pandemic.