Partnership with All England Lawn Tennis Club has been going for 11 years.

By Samantha Conti on May 5, 2016
View Slideshow 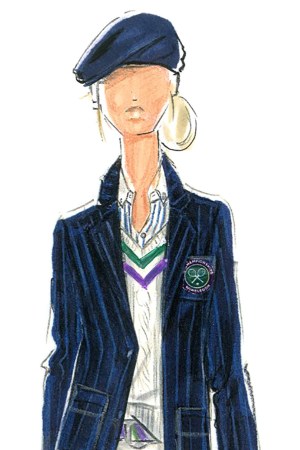 SPLENDOR ON THE GRASS: Like strawberries and cream, regular rain showers and the Duchess of Cambridge rooting from the royal box, Polo Ralph Lauren’s uniforms for the annual Wimbledon tennis championships have become a British tradition.

After 11 years, the label is updating its designs for Wimbledon’s on-court officials, including chair umpires, line umpires and ball boys and girls. The new uniforms will make their debut next month when the tournaments begin at The All England Lawn Tennis Club in Wimbledon, London.

The ball boy and girl uniforms have a more technical look and feel with updated fabrics, including a performance pique knit shirt with stretch and moisture-wicking properties. Girls will wear a navy skort and boys’ navy tennis shorts. The uniforms also feature flashes of the traditional Wimbledon colors of green and purple, another new addition.

The women’s umpire outfit features a fitted, pinstriped navy blazer, a wide-leg trouser and a bias-cut skirt with mother-of-pearl buttons. The men’s sport coat has a navy pinstripe with three buttons, a notch collar and patch pockets. The dress shirt worn by all umpires is made from a fine yarn with a soft hand, according to the company. The umpires’  trousers are white, and both men and women will wear white tennis sweaters with purple and green stripes around the V-neck.

The Polo Ralph Lauren Wimbledon collection will be sold at select Ralph Lauren stores, online,and through wholesale partners. Merchandise will also be available during the tournament, which runs from June 27 to July 10, at The Wimbledon Shop on site and online.

Polo Ralph Lauren marked its 10-year anniversary as official outfitter of The Championships, Wimbledon, last summer. “Ralph Lauren Corporation is honored to continue its part in the rich sporting tradition and history of tennis at Wimbledon on its 130th anniversary,” said Ralph Lauren.

The event is attended by an average of 490,000 visitors with a global news access audience of over 1 billion viewers across 200 territories. The digital audience boasts nearly 50 million unique visitors across Wimbledon Web sites, social channels and apps.

The partnership with The All England Lawn Tennis Club is one of the Polo brand’s many sporting collaborations and sponsorships. It works with organizations including the United States Golf Association; The PGA of America; the U.S. Ryder Cup Team, and the U.S. Open Tennis Championships. As reported, it has created the opening and closing ceremony uniforms for the U.S. Olympic and Paralympic Teams.