The looks for the closing ceremony and the casual village wear are white with red and navy accents. 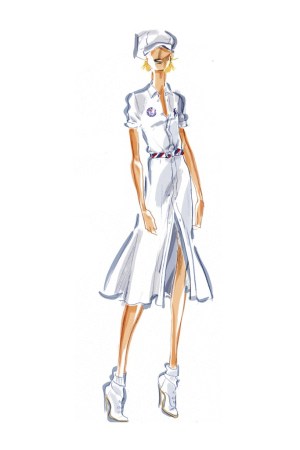 OLYMPIC JUMP START: London’s summer Olympics may still be more than three months away. On Wednesday, though, the anticipation got a significant boost, when the U.S. Olympic Committee unveiled some of Ralph Lauren’s designs for the U.S. Olympic and Paralympic team. The looks for the closing ceremony and the casual village wear are white with red and navy accents. The specific looks for the July 27 opening ceremony will be unveiled at a later date. “Ralph Lauren takes great pride in understanding our U.S. athletes and creating a sense of patriotism through clothing,” said Peter Zeytoonjian, managing director of consumer products and licensing for the U.S. Olympic Committee. The lineup is not just for athletes: the Ralph Lauren 2012 Team USA Olympic Collection went on sale at RalphLauren.com Wednesday, and will hit select Ralph Lauren. Team USA and department stores next month.