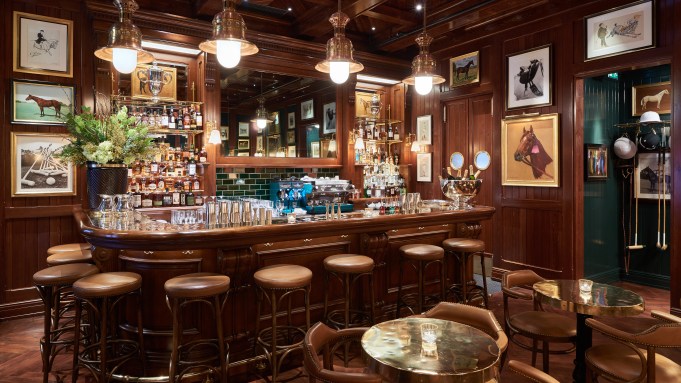 JAVA JIVE: Ralph Lauren is taking his hospitality business on the road once again, with a new concept called Ralph’s Coffee & Bar that will sit next to the new Polo European flagship on Regent Street in London.

It’s the brand’s first dining destination in the British capital (there are already Ralph Lauren eateries in New York, Chicago and Paris) and is inspired both by The Polo Bar and Ralph’s Coffee in Manhattan.

The new space, which is set to open on Thursday,  will have saddle leather banquettes, a brass-topped bar and dark wood paneling. Walls will be covered with green billiard cloth and a collection of equestrian-themed artwork.

It will seat 24, with 12 additional seats at the bar, while the menu will offer coffee, cocktails, light meals, shared plates and snacks such as fried olives and mixed nuts. The bar plans to serve up cocktails including an Old Fashioned and a Ridgway Margarita, as well as custom-roast coffee made from organically grown beans by La Colombe.

The designer called the new place a “natural extension of the heritage of Polo, that will add yet another dimension to the worlds we create.” The bar will be open from 10 a.m. until 8 p.m. daily, and from noon until 6 p.m. on Sunday.

The European Polo flagship store, which opened in September, spans 17,561 square feet over three floors, with dedicated areas for men’s, women’s and children’s wear. It also houses the first Create Your Own customization shop.

The brand also said it sees the Regent unit as a bridge to a new and younger audience – and tourists, too – customers who may not necessarily be making the trip around the corner to Ralph Lauren’s mainline flagship on New Bond Street.

“Global tourists are coming there and you want to be a part of that energy,” said David Lauren, the company’s vice chairman and chief innovation officer.

“You need to step it up and stand out and create something that feels distinctive and special. I think when people walk down Regent Street they’ll stop at Polo and think it’s unusual — and beautiful,” he said in an interview last September.