Rare Burmese Ruby To Be Auctioned at Christie’s

The stone, clad in a classic Verdura setting, is expected to realize in excess of $12 million. 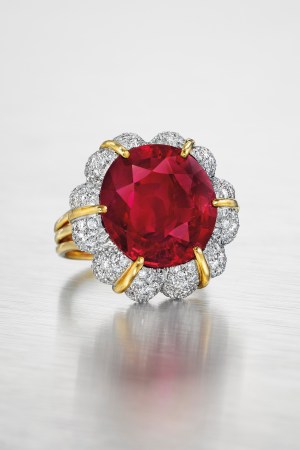 RED ALERT: Christie’s spring installment of its New York Magnificent Jewels sale is expected to realize in excess of $45 million when the final gavel drops on April 20.

With lots from the estates of collecting socialites including Carol Petrie, Nancy Witcher Langhorne Astor and Marie-Hèléne Weill — the auction house hopes to again find success in the American market, as economic instability in the Eastern hemisphere continues.

The sale’s totem lot — a 15.99 carat Burmese ruby set in a gold and diamond ring by Verdura — is estimated to take between $12 million and $15 million. A release issued by Christie’s claims that the stone “is the most important Burmese ruby to appear at auction in the United States in over 25 years.” The last time the auction house sold a Burmese ruby of comparable size was in 1990.

Said Rahul Kadakia, the auction firm’s international head of jewelry: “Top-quality Burmese rubies of over 15 carats are an absolute rarity in the world of colored gemstones and the record price of $18.3 million achieved for the 15.04-carat Crimson Red Ruby at Christie’s Hong Kong in December 2015 exemplified the voracious appetite of collectors for these gems.”