The American designer has tapped the model and television personality to promote the brand's holiday collection in Japan. 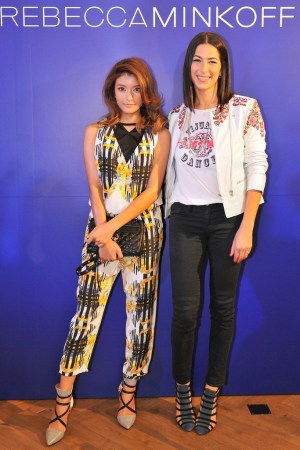 THINKING LOCAL: Rebecca Minkoff has teamed up with model and television personality Rola to promote the brand’s holiday collection in Japan. On Wednesday, the designer and Rola, who is of Bengali and Japanese heritage, hosted a mini fashion show at the brand’s flagship store in Tokyo’s Ginza district. The model stars in Rebecca Minkoff’s holiday visuals and also designed a handbag for the brand. It will go on sale in March.

“Japan was the first country outside of the U.S. to carry the bags, and they beat us to opening a store,” said Minkoff, who has been traveling to Japan frequently to promote her business with local partner Tokyo Style. When it came to picking Rola, the designer said it was important for her brand to choose a face with a certain profile within the country. “[It] was our way of saying, ‘You guys obviously got in the game first and this will help grow the business,'” she reasoned.

Minkoff’s first flagship store in the United States is due to open in New York in April or May. The designer said the company is also looking to open additional freestanding stores in Tokyo, as well as additional shops-in-shop across Japan, perhaps in the coming year. In addition to the Ginza store, the brand currently has corners in nine department stores across the country.