Featuring soft seven-gauge cashmere pullovers, dusters, dresses, tops and tanks, and matching sets (indicative of the Instagram-induced trend of influencers palming coffee mugs in their luxury loungewear), the collection hopes to be a sustainable, luxury choice for transitioning to warmer seasons.

The premium cashmere business was founded in 2016 by Bruce and Leslie Gifford as the direct-to-consumer channel of the Los Angeles-based firm 360 Sweater Company LLC. The launch was celebrated with an ad campaign featuring Kate Moss photographed by Peter Lindbergh.

Having been in the business of cashmere for more than 20 years, today, the Giffords find themselves wrestling with flagrant misuse and green-washing of terms. Even Eileen Fisher and Patagonia have dabbled in “recycled cashmere,” with still others flaunting the use of “technical cashmere.”

In Gifford’s book, it doesn’t really mean anything: “I guess I’m the last man standing or whatever,” he told WWD.

His comments call into question what’s become the norm, brands take the feat of subbing in “recycled” content, even if just applied in one product or capsule collection — and run miles with it in marketing efforts.

Maintaining two yarn relations, one of which he says is the largest cashmere yarn supplier in the world, Gifford buys all of the cashmere from one company for his two wholesale brands.

But as for Naked Cashmere, the factory is all vertically integrated — with a purchasing office in Mongolia and owned washing and de-hairing facility. According to Gifford, every batch can be linked back to each farm, all of which espouse certain standards of animal welfare.

The recycling process for its fully recycled cashmere collection is complicated, involving the use of vacuums under the machines to collect fibers, with the bulk of recycled cashmere coming from “un-knitting or chopping up previously made sweaters.” Weight and length are everything in determining quality, so Naked Cashmere sorts by length and uses the longest fibers for Cashmere Reborn.

When WWD asked about certifications, he added: “right now there are eight to 10 certifications from NGOs battling to be the benchmark. Our suppliers are working with most of them.” One of which is the Global Recycle Standard.

And he acknowledged another trade-off; “People tend to look at sustainability in two ways — environmental and animal. For the environment, it’s getting better.” 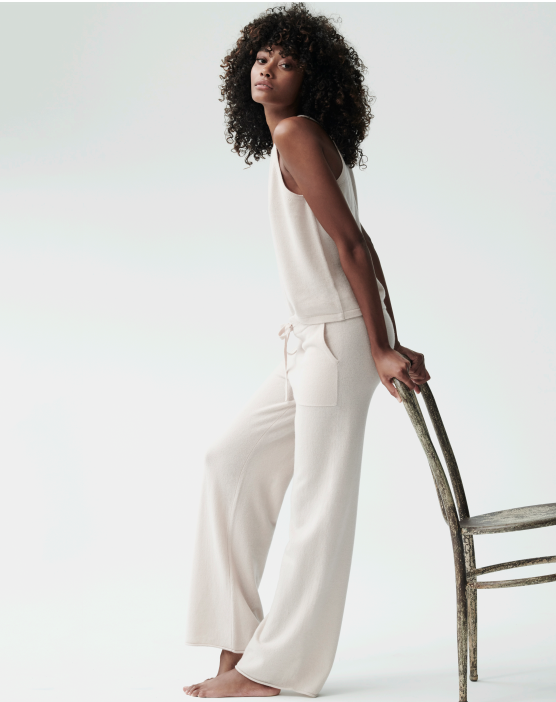