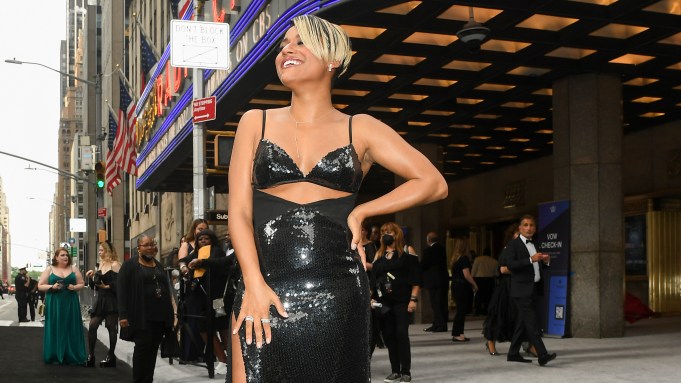 The Tony Awards are back in full swing.

Both Broadway and Hollywood’s biggest stars came together Sunday night to recognize and celebrate the biggest achievements in theater and Broadway in the last year. Among those who attended include Cynthia Erivo, Sutton Foster, Sam Rockwell, Ruth Negga, Andrew Garfield, Phillipa Soo, Jessica Chastain and Jesse Williams, among others.

Academy Award-winning and Tony-nominated actress Ariana DeBose was tapped to host this year’s ceremony. She looked to Boss, wearing a custom black sequin tank dress featuring a midriff cutout design and jewelry by Or & Elle. She was styled by Zadrian Smith and Sarah Edmiston.

Vanessa Hudgens continued her streak of fashion-forward looks with a strapless black long sheath dress from Schiaparelli, designed by Daniel Roseberry, from the label’s spring 2022 collection.

Both Hudgens and Erivo were styled by Jason Bolden.

Garfield, one of the night’s presenters among Hudgens and Erivo, wore a velour all-black suit by Tom Ford, with help from stylist Warren Alfie Baker.

Foster, nominee for Best Performance by a Leading Actress in Musical, wore a green dress by Dolce & Gabbana and jewelry by Tiffany & Co. She was styled by Emily Sanchez.

Sarah Paulson brought high couture to this year’s Tony’s, wearing a puffed sleeve printed gold dress with an exaggerated bustle design at her waist. She was styled by Karla Welch, who also dressed another Tony nominee, Ruth Negga, who wore a custom black dress by Armani Privé that featured a plunging halter neckline and bejeweled sparkling skirt.

Click through the gallery above to see the standout fashion moments at the 2022 Tony Awards red carpet.

Everything to Know About the 2022 Tony Awards

The Surprise of Jesse Williams