If red roses are the symbol of love, then the brand was feeling mighty amorous on Wednesday night. 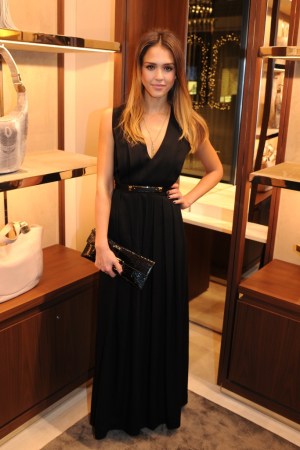 RED ZONE: If red roses are the symbol of love, then Ferragamo was feeling mighty amorous on Wednesday night. There were no less than 10,000 red roses on the long table that ran down the center of London’s historic Burlington Arcade at the dinner hosted by the Florentine brand’s chairman, Ferruccio Ferragamo, and chief executive officer Michele Norsa, to celebrate 75 years of its store on Old Bond Street, and the expansion of both that shop and the one on Sloane Street.

Alba was in town for a three-day trip with her daughter, Honor, 4, and the two of them had been enjoying London’s “girly” treats. “I took my daughter ice-skating at the Natural History Museum, and she had her first taste of tea,” she said. “We had tea in our hotel, and she was like, ‘Ooh, what’s this?’ I also took her to Hamleys [the toy shop] and to Fortnum & Mason. We’re having a little girly trip.”