“Women in Art: Figures of Influence” is a collection of black-and-white portraits of today’s top female figureheads of the art world. 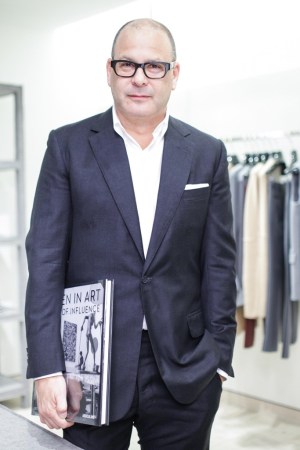 REED SPEED: Reed Krakoff’s photographic aptitude was the topic of conversation for Wednesday at Bergdorf Goodman, where guests gathered to fete his new book, “Women in Art: Figures of Influence.” The collection of black-and-white portraits of today’s top female figureheads of the art world is published by Prosper Assouline.

Guests including Frédéric Fekkai, Caroline Issa, Max Snow and Vanessa Traina Snow streamed into the store’s third floor, ornamented with enlarged prints from the book floating on the walls. Krakoff along with his wife, Delphine, received guests at his designated signing table. Between squiggles, the designer discussed his shutter speed. “I literally took 20 minutes to shoot with each person,” he said. “Everyone was shot in their gallery or their home. I wouldn’t see the space beforehand. I would just show up. I liked the idea of doing something totally organic in that way.”

Afterward, guests popped up to the seventh floor for a celebratory supper, which was happily capped off by the designer’s matte-black macaroons for Ladurée.